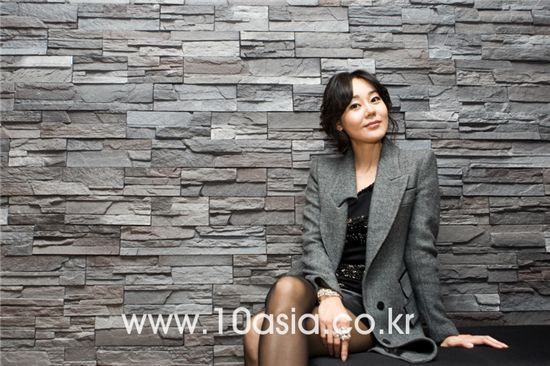 Kim Yunjin spent her childhood in the United States and made her first step into the world of acting on Broadway. Hence, English was the language she acted in and also used for over 20 years to speak her mind. But 10Asia's interview with the actress revealed that her Korean was just as accurate and rich in expression. Whatever the question, she gave clear answers while appropriately adding in adjectives which would embellish her sentences. Her style of speech was just like her acting -- on point yet elaborate.

Many people associated Kim with the term 'female soldier' for a long time after she made her film debut playing a North Korean spy in "Shiri". The audience was unfamiliar with this actress who till then had made a few unnoted appearances in Korean dramas, but she left her mark with "Shiri", standing strong with her role opposite top Korean actor Han Suk-kyu who played the South Korean agent she loves. She then took on "Gingko Bed 2: Danjeobiyeonsu" where her piercing eyes reached beyond the camera to the audience. And just when it seemed she would forever trap herself in the image of a female soldier, Kim started expanding on her scope of acting. In "Ardor", she suffered just like her character Mi-heun did until she found hope in her life. And she may have ended up being the stereotypical Asian woman and finicky lawyer with her roles in the "Lost" series and Korean pic "Seven Days" but with her belief that "it is up to the actor to fill in the empty spaces", her characters became individuals with something more than empty hearts.

"There is nowhere for us actresses to stand. I recently talked with Lee Mi-yeon and Kang Soo-yeon who said there are very few roles for actresses my age to play. I'm sure many actresses are in similar situations", Kim said regrettably of the reality of the Korean film industry while sharing her thoughts on the films she loves. Kim gave her choice of movies starring female characters which made her overcome with jealously.

"I marvel at her everytime I see her because she's perfect in both technique and delivering emotion. She also has charisma and is great at pulling off different English dialects. I envy actors like her who have great technique. If I was asked to talk in a certain Korean dialect, I'd had to live in that area for several months but she's from Australia so she is great at speaking in a British accent too. It's amazing how she can pull off pretty much any role. And Judi Dench is also a great actress. She brought out Barbara's loneliness through her voice which sounded as if it would break as easily as thin crystal. I really enjoyed the two's acting which did well in bringing their not-easy-to-act characters to life.

Lonely or mentally worn-out people look for something to depend on. It could be anything -- alcohol, chocolate or sometimes, other people. But what gives you strength will surely ruin you if such dependancy turns into addiction. Such was what the 15-year-old boy was to Sheba, played by Blanchett, as was Sheba to Barbara, played by Dench. Barbara, who obsesses over Sheba to avoid her loneliness, is as frightening as a thriller while her immeasurable loneliness is suffocatingly sad.

2. Kate Winslet from "The Reader"
2008 | Stephen Daldry
"I read the book before seeing the film and I had thought the story would make a great movie. And how excited I became when I heard it really would be made into one. I envied [Winslet] for the fact that she got to play Hanna's role. (laugh) It's very difficult to carry over what's in a book to the screen but I think Winslet managed to pull off the subtle emotions her character Hanna felt while also filling in the empty spaces. Hanna sobs like a kid when Michael reads to her. It was undoubtedly the best scene because the expression Winslet put on when she gets immersed in the story containing the love, life and knowledge that she desires for, was so perfect".

The Holocaust was one of mankind's worst crimes but could it be said that all who took part in committing the crime was evil? Some may view Hanna, played by Winslet, as a soulless being although she engaged in the evil deed without being aware of it, but to Michael, played by Ralph Fiennes and David Cross, she is his first and only love. Hanna may have sent Jewish people to gas chambers but she was also a woman who had a warmth to her, one who cries over love stories and laughs at comical characters.

3. Keira Knightley from "Atonement"
2007 | Joe Wright
"I think this is the film where Keira Knightley left the strongest impression. I could feel the confidence of her character Cecilia as soon as she appeared in the film. And the confidence she exuded even when walking out of the fountain when she was wet! I was impressed by the actress who played Cecelia's younger sister, Briony. To feel guilty for the rest of your life over a small mistake you made when you were young... I was definitely moved by how Cecelia made an effort to love even though there was nothing left of her soul".

Envy and misunderstanding are the main obstacles to love. What led their relationship to tragedy was not their difference in status, but petty misunderstandings and someone's jealousy. Their last moment together is so heartbreaking that it is difficult to forgive Briony, even if she may live for the rest of her life without being able to repay her debt.

4. The three actresses from "The Hours"
2002 | Stephen Daldry
"I like Meryl Streep, Julianne Moore and Nicole Kidman but I had also liked Virginia Woolf's novel 'Mrs. Dalloway' since I was young. To think that a group of such great actresses would tell that story! I envied the fact that you can see all three actresses in a single movie. And I liked that scenario which did well in depicting the subtle traits to the female characters. How great it would be if such a poetic yet popular film starring actresses was to be made in Korea too".

There are three Mrs. Dalloways in this film. Virginia Woolf herself, a housewife immersed in Woolf's book, and a publishing editor nicknamed Dalloway. The three's lives, which transcend time and space yet are interconnected by the novel, are surprisingly alike -- their lives which seem so peaceful on the outside yet are being gnawed at by the pains they have secretly tucked away. How they overcome or become seized by their wounds will make the onlooker look back on their daily life too.

5. Tang Wei of "Lust, Caution"
2007 | Ang Lee
"The fact that Tang Wei's bodily exposure in the film was emphasized still trouble's my mind. People fussed over whether I too had overexposed myself in film "Deep Loves" when it had nothing to do with the movie itself. I think newcomer Tang Wei was great because she in no way was outshined by top actor Tony Leung Chiu-Wai. I marveled at the director's genius once again after coming across a book which contained the process of how the film was produced because it turned out that the problematic sex scene was shot at the very beginning of filming. The director had wanted to show it as something close to violence, as if they were in war. I also marveled at the actors who must have been under a huge amount of stress from having to shoot that scene in the very beginning but managed to overcome it".

Female college student Wong Chia Chi, played by Tang Wei, becomes involved in China's resistance to plot an assassination against Yee, played by Leung, a high-ranking special agent under the puppet government of the Imperial Japanese Army. But the woman finds herself falling in love with the man who too, becomes increasingly attracted to the woman. So was it true love that they felt for each other? What else could the empty look in his eyes mean, the look he puts on after he pushes out the woman he physically interacted with into a deadly situation?