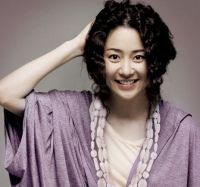 Top actress Go Hyun-jung surprised fans not only by appearing on a TV entertainment show for the first time in 15 years but also addressing rumors surrounding her shrouded personal life.

The 38-year-old rose to stardom through the 1995 hit TV series "Sandglass" and then made headlines for marrying into one of the wealthiest Korean families that same year. Her marriage to Chung Yong-jin, Samsung Chairman Lee Kun-hee's nephew and vice president of Shinsegae Department Store, ended in 2003 and Ko resumed acting in 2006.

She appeared on "Golden Fishery", a popular MBC talk show hosted by comedian Kang Ho-dong. The actress surprised the host by bringing up rumors such as how she was allegedly ostracized by her former in-laws during her marriage.

"I've heard people say that my in-laws spoke in English around me but that's completely untrue", she said. "They are well-educated people and would never ostracize people in such a childish way".

The star also spoke frankly about her romance with Chung. "People gossiped that I married him for money, but I liked him so, so much. He is a charming man with sophisticated wit", she said, adding that she would marry him again if she were to go back to the time she first met him. But the star admitted having felt burdened by her former husband's background. "I think we got married too quickly. I think things might have been better if I had been more mature".

She also brought up, without hesitation, her "scandals" with co-stars Jo In-sung ("Spring Days") and Chun Jung-myung ("Fox, What Are You Doing ??"). "Of course I did, in all seriousness", she said when questioned about "proposing" to the actors. "Jo In-sung is far from boring and is in fact witty and humble. We have good chemistry. Whenever we joked around, I suggested we get married and asked what he was waiting for. He'd say he didn't like easy women. Chun Jung-myung, on the other hand, would say, `I have to get my father's permission'. I'd make jokes like that because I knew they'd joke back. I was a bit afraid of the scandal it might cause, but I don't think actresses need to keep a low profile", she said.

The former Miss Korea also spoke about plastic surgery. "I wasn't that pretty when I was a student. I fixed things up a little", she said, rejecting her public image as a natural beauty. "No, it wasn't a complete face lift but I made a few touches here and there". But she denied reports of allegedly spending 100 million won on skin care, though she frequents a dermatologist and spa.

Ko will play the leading role of Seo Hye-lim in "Daemul" ("Daemul - Big Thing", Queen-maker), to air on SBS in May.