Actress Ko to Return as President in New Drama 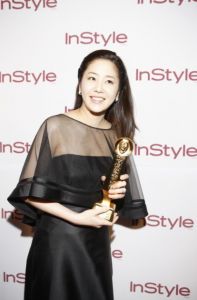 Actress Go Hyun-jung will return playing the role of a female president in a new drama to be aired on SBS in July.

Ko will take the leading role of Seo Hye-lim in "Daemul" ("Daemul - Big Thing", "Queen-maker"), a drama based on the comic book of the same name by Park In-gwon.

The drama revolves around a female prosecutor who fights against social injustice and tenders her resignation after arresting a mogul who masterminds organized crime in political circles. Then, after working as a lawyer who advocates human rights, she earns a reputation as caring for people, she then runs for, and is elected, president.

An official of the drama production company said that the drama will focus on the making of a female president. "The script writer says `daemul' means the `great person' in the drama", he said.

The drama will also co-star kwon Sang-woo, who will take the role of Ko's counterpart. .

The soap opera consisting of 20-24 episodes is expected to cost 10 billion won to produce.

A former 1989 Miss Korea runner up, Ko made a successful comeback to the entertainment industry with the 2005 TV series "Bomnal" ("Spring Days") after her divorce. She starred in "Yeouya Mohani" ('Fox, What Are You Doing ??')", a mini-series in 2006.
p_644
She enjoyed stardom after starring in the 1995 TV series "Sandglass). She announced her retirement that year upon marrying Chung Yong-jin, a nephew of Samsung chairman Lee Kun-hee and vice president of Shinsegae Department Store. The marriage ended in 2003. Ko also acted in the film, "Woman on the Beach" in 2006.