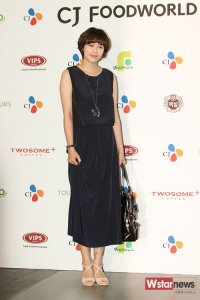 Actress Lee Ha-na, who currently co-stars on "Women in the Sun", a phenomenally successful drama series on KBS 2TV, is putting her heart and soul into the drama shoot in spite of a recent injury she received to her face.

The actress was scratched by a shopping bag right below her eye during a recent shoot. Lee's management agency said the actress was taken to the hospital immediately after the injury and received emergency treatment. The agency said despite the injury, the actress is exerting herself to the fullest with the end of the drama series drawing near.

Lee recently told reporters that the drama series has been very special for her as an actress, as she was able to show the viewers a completely different side to her usual bubbly on-screen persona. She added that the love and support of the drama fans is more than enough for her to overcome the pain of her recent injury and continue with the shoot.