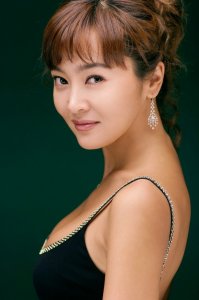 Looking both nervous and happy at a press conference held Thursday, a tearful Lee said that she will be a good wife, daughter-in-law and daughter. Lee also said she wants to have two children and continue acting after the marriage.

Lee met her fiance Kim two years ago at a social gathering. Kim is a fashion entrepreneur based in United States and is two years her junior. Kim, however, did not attend the press conference and Lee wants to keep information about her husband-to-be from the public.

The couple plans to wed outside Seoul city. Their wedding will be held at Sol Beach Resort in Yangyang, Gangwon Province.

In 2004, however, Lee hit the news due to a controversy involving her posing nude as a comfort woman. Lee had to apologize on her knees to surviving comfort women and the agency had to burn all the photos and videos.

"Actress Lee Seung-yeon to Wed"
by HanCinema is licensed under a Creative Commons Attribution-Share Alike 3.0 Unported License.
Based on a work from this source