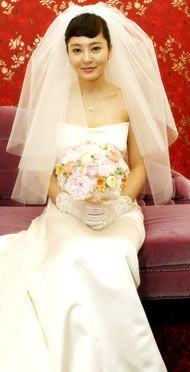 The couple met two years ago through one of their friends. Her husband Kim Moon-chul is an aspiring fashion entrepreneur based in the United States.

About 400 visitors, including her close celebrity friends, blessed the wedding ceremony, which was not open to the public.

The newly weds will take a one-week honeymoon trip to the U.S. after staying at the resort for a day.

Lee is renowned for her role in the movie "3-Iron". She started her acting career after winning third place in the 1992 Miss Korea beauty pageant.

Lee also debuted on film with "Piano Man" (1996) but won most praise for her part in "3-Iron" (2004), directed by Kim Ki-duk, who won the Best Director Award at the Venice International Film Festival for the movie.

Lee currently hosts a radio show "Lee Seung-yeon's Cinetown" on SBS and "Style Magazine" on the cable TV channel OnStyle. She has recently launched the fashion brand, "About el".

"Actress Lee Seung-yeon Weds Businessman"
by HanCinema is licensed under a Creative Commons Attribution-Share Alike 3.0 Unported License.
Based on a work from this source