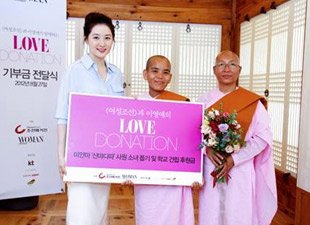 Actress Lee Young-ae is reaching out...all the way to Myanmar.

The top actress served as the celebrity spokesperson for the "Love Donation" project, hosted by Woman Chosun magazine. She donated a large sum of money which will be used to build a school in Myanmar.

She was inspired to do such a deed through the show "Asia Hunter" on a cable network in Korea, which focused on a do-gooder. She was moved by the charitable person's donations that she decided to also do her part to give back to the community.

"Actress Lee Young-ae Sets Up School In Myanmar"
by HanCinema is licensed under a Creative Commons Attribution-Share Alike 3.0 Unported License.
Based on a work from this source