Actress Lee Young-ae To Give Birth In February 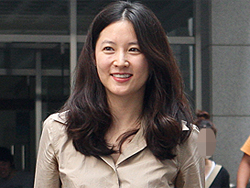 Hallyu star Lee Young-ae will be welcoming a new baby girl to this world in February. The birth is scheduled to happen in a hospital in Cheongdam-dong of Seoul.

The 40-year-old actress has stayed very low key after getting married to a businessman in August of 2009. She's currently in the middle of pursuing a phD, and has barely been seen out of her home. That hasn't stopped the rumor mill from spitting out speculations, such as Lee being pregnant with twins.

An inside source said, "Lee Young-ae is extremely happy after hearing her doctor's latest news that she will be having a daughter. There are high expectations for a beautiful daughter, especially if she takes after her mother. The due date is set in mid-February, but because this is Young-ae's first child, it may be a little later by a week or so".

With her due date just around the corner, Lee has been taking extra pre-cautions on everything. Particularly, she's been avoiding leaving her house as much as possible with the freezing winter weather. However, she hasn't been slacking on her other motherly duties. For example, Lee has bought all the needed baby products and packed her bags for when she checks in to the hospital to give birth. Currently, she has been keeping up with basic physical exercises as she waits to meet her daughter.

One thing Lee hasn't done as of yet is to make plans with a post-natal care center. It has yet to be seen whether she will use the one the hospital recommends or another outside center. Above all, she seeks a center that will honor her and her daughter's privacy while delivering quality care.