Actress Oh Comes Back After 10 Years 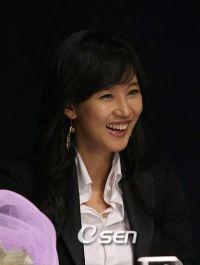 Actress Oh Hyun-kyung, 37, who was shunned over a sex video scandal, will be back on television sets after a 10-year absence. Oh will appear in the drama "First Wives' Club", broadcasted by SBS to air Sep. 29.

During her long leave she has come to know, learn and experience much, the former Miss Korea told reporters at a press conference on Aug.7. Moreover, she now has a five-year old daughter and motherhood has given her the courage to press on.

For the actress, the ten years away from screens can be summed up in two words: pain and love. She was forced to quit acting after video footage of her having sex with her then boyfriend was distributed through the Internet, an incident that was almost unbearable for Oh at the time. "What I experienced was something that was hard to bear at that age, my late-twenties. I felt like I was living in a separate world", Yonhap News quoted Oh saying at the press conference.

There's always a bright side to things, however, and for Oh, the scandal helped her to discover the love and care of people around her. Oh said that many people had helped and encouraged her to take up acting again, and it was these people who made her realize how lucky she is.

The beauty pageant winner showed determination to work hard to win hearts, vowing to approach viewers through her acting and her way of life, rather than with words.

"Actress Oh Comes Back After 10 Years"
by HanCinema is licensed under a Creative Commons Attribution-Share Alike 3.0 Unported License.
Based on a work from this source