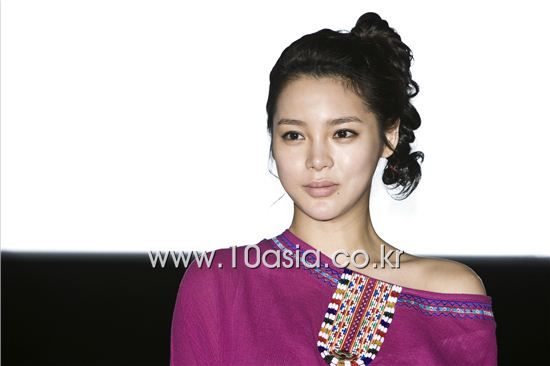 There are many words in this world which can be used to describe a beautiful woman but the adjective which probably best suits actress Park Si-yeon is 'alluring'. The clean-cut contour of her face and deep eyes which became known first through her participation in the Miss Korea competition in 2000 and then a cosmetics commercial, continues to retain its classical beauty ten years later.

That may be why the characters Park played were women who drove many men to their destruction and misfortune. In film "a LOVE", Park had to watch her first love experience tragedy due to her, in MBC TV series "Bitter Sweet Life" she was the lover of a married man and in KBS drama "The Slingshot", she sacrifices herself to become owned by the enemy for her boyfriend who is in jail. Park smilingly had said, "I personally don't like femme fatals. Men should be happy because of women, not unhappy". But one cannot avoid doing something that is considered taboo when attractive enough to do it. In recent KBS "Drama Special - Red Candy", she played a pretty employee at a bookstore who falls in love with a married man. And it is not easy for any actor to take on a one-act play but she took it on with her devoted trust in scenarist Noh Hee-kyeong. "I felt that I had to be in whatever she writes".

It is interesting to note that however, the debut stage for this elegant and loveable actress was a childrens' music contest on KBS. "When I was young, I used to be so shy that I cried when I was told to sing in front of my dad on the Lunar New Year. My mom ended up sending me to a singing academy, hoping it would help me get over my shyness, but the strange this is that I couldn't sing in front of my mom but I wasn't nervous at all on stage", Park explained. She then won a drawing contest in fifth grade. This actress, who from a young age had shown glimpses of becoming a star, recommended songs which give hope.

B.o.B. "Nothin' On You"
"This is the song I've been loving these days. I was washing the dishes in the kitchen when I ran to the living room after hearing this play on the television in the living room. I waited until the song ended to see what the title of the song was. He doesn't use any technique in particular but he still has a great voice and I become happy when I listen to this song because the singing and rap go together so well". B.o.B, whose real name is Bobby Ray Simmons, was born in 1988. In "Nothin' On You", the song from his first single album, B.o.B expresses his love for his lover in a comical way. Singer and producer Bruno Mars was featured in the song, contributing his sweet vocals to the song. In Korea, the song became a hit after former 2PM leader Jay Park released his cover of the song on YouTube and the original single has made it to No. 1 on Billboard's Hot100 chart. B.o.B, recognized as a rising hip-hop artist, is set to release his debut album through label Grand Hustle established by rapper and producer T.I.

2. Kelly Clarkson "Thankful"
"I like cheerful songs. I really like 'Beautiful Disaster' because I the lyrics do a really good job of expressing how someone in love feels by saying having met that person is a beautiful disaster. But the live version of this song is much better than the original so you have to try listening to both!" Kelly Clarkson, winner of the first season of U.S. reality show "American Idol" in 2002, has sold over a total 56 million copies of her four albums including her first album "Thankful". She continues to be loved by her fans for her music which crosses between pop and rock after having won a Grammy Award for Best Female Pop Vocal Performance in 2006.

3. Fergie "The Dutchess"
"I went to study abroad to the United States when I was in high school. I lived in the dorms then and then alone when in college. Hence I was lonely and had a hard time so I looked for a lot of encouraging songs to listen to, even when I'm going to the cafeteria. I think 'Big Girls Don't Cry' from Fergie's album is a song that would help in such situations". Fergie, whose real name is Stacy Ann Ferguson, started working in the entertainment business providing the voice for Sally in animation "Charlie Brown". She was then a member of R&B trio Wild Orchid during the 90s until she got scouted as the lead vocalist for hip-hop group Black Eyed Peas in 2003. Her first solo album "The Dutchess" released in 2006, sold over seven million copies worldwide.

4. Olivia "A Girl Meets Bossa Nova Vol.2"
"My younger sister had the song 'Sweet Memories' as the background music to her social networking website Cyworld homepage and I liked it so much that I kept going to her homepage until I ended up setting it as the background music to my hompage as well. I actually don't understand the lyrics because they're in Japanese but the only phrase 'Sweet Memories' that I did understand amidst the tranquil atmosphere of the song sounded so pretty". Bossa nova vocalist Olivia, born in Singapore and pursuing a singing career in Japan, debuted at the age of 20 in 2005, gaining popularity for her mellow vocals and sensitivity in debut album "A Girl Meets Bossa Nova". In her second album, composed mostly of remakes of famous jazz, pop and bossa nova songs, contains Sade's "Kiss of Life" and bossa nova maestro Antonio Carlos Jobim's "Wave". The last track "Sweet Memories" is the remake of 80s Japanese female pop singer Keiko Matsui's song.

5. Lee Hyori "H-Logic"
The last album Park Si-yeon picked was female solo singer Lee Hyori's fourth full-length solo album "H-Logic". Park and Lee appeared together in SBS variety show "Family Outing" and the two proved they were best friends through MBC talk show "Come Play". "I really had been a fan of Lee Hyori from a long time ago. We became close through 'Family Outing' but she's so amazing when she's performing on stage as a singer that I wonder whether she really is the friend that I know. From her previous album I liked "Will it Get Better?" the best but from the new album, I listen to "Chitty Chitty Bang Bang" a lot as well as "How Did We Get" that she sang with Daesung. The lyrics are cheerful and positive".