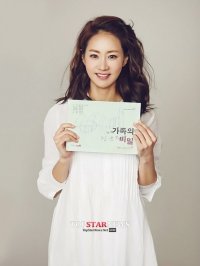 Actress Shin Eun-kyung is filing for divorce, after her husband forged documents to borrow money from another entertainment company.

The 34-year old actress, who recently starred in the television drama "Bad Couple", married Kim Jung-su in 2003. Sin alleged Kim, who was head of Oracle Entertainment until he left early July, had forged her signature to borrow money from another entertainment company. Now, the entertainment company is demanding Sin pay a little over 400 million won.

Because of this incident, Shin has said she could not trust her husband anymore. This led her to file for divorce. The couple has one son.

Shin debuted on television in the late 1980s, acting in several TV dramas. It was her role as a prostitute in veteran director Im Kwon-taek's film "Downfallen" that propelled her to the limelight.

She took a break from acting after she got married and had a baby. However, she returned to acting in 2005, starring in films such as "Diary of June" and "Quiz King".