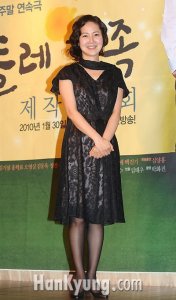 Actress Yang Mi-kyung will publish her essay collection in Japan.

The essay collection entitled 'With Love' will be published on February 27th. In her essays, Yang candidly reveals her thoughts on being a mother and wife and on her life as an actress. The essay collection also contains the special 'Dae Jang Geum' or 'Jewel in the Palace' interview as well as related photos.

Yang has been working hard to promote Korea's palace cuisine and dishes in Japan. She even has an official fan club in the neighboring country.

Yang also introduces a book she authored on 60 poems written by her favorite poet entitled 'Yang Mi-kyung's Poems Read with a Heart' and a previously written essay collection entitled 'If You Want to Live A Happy Life'.

In 2006, an album containing 13 of her favorite ballad songs performed by male artists as well as three poems she personally recited was sold out immediately after it was released.