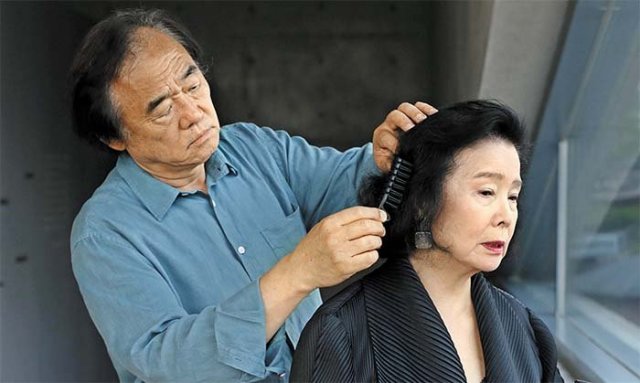 Paik Kun-woo brushes his wife Yoon Jung-hee's hair during an interview with the Chosun Ilbo in July 2016, in this file photo

"She began showing symptoms four or five years ago and three years ago she was diagnosed with Alzheimer's", Paik, a distinguished pianist, told the Chosun Ilbo on Sunday. "The disease progressed quickly and now she can't even remember our daughter's name".

Yoon debuted on the silver screen in the 1967 film "Sorrowful Youth" after beating 1,200 other competitors to the lead in an open audition the previous year. Since then, she has appeared in 330 films, mostly in leading roles.

In 2011, she was named best actress of the year by the Los Angeles Film Critics Association for her performance in "Poetry" by Lee Chang-dong. She was awarded the Ordre des Arts et des Lettres by the French government the same year. In the movie, Yoon ironically portrays a woman suffering from dementia.

Yoon and Paik have been living in Paris since 1976 and she followed him around the world as he performed. She is now being cared by their daughter, violinist Paik Jin-hee, on the outskirts of Paris.

"Actress Yoo Jung-hee Suffering from Dementia"
by HanCinema is licensed under a Creative Commons Attribution-Share Alike 3.0 Unported License.
Based on a work from this source