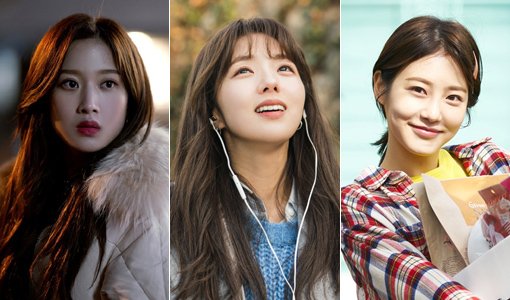 Actresses Moon Ga-young (24), Chae Soo-bin (26) and Shin Ye-eun (22) are battling over the position of the next rom-com queen. They star in the MBC drama "Find Me in Your Memory", tvN's "A Piece of Your Mind" and KBS 2TV's "Meow, the Secret Boy" respectively. The fact that the age range, which was tightly dominated by actresses in their 30s such as Son Ye-jin, Gong Hyo-jin and Seo Hyun-jin, has dropped dramatically to the early 20s is also intriguing. Will they renew the rom-com genealogy?

● "Find Me in Your Memory" Moon Ga-young... the fancy king

Moon Ga-young comes first as top star Yeo Ha-jin. She draws romance with the anchor character of Kim Dong-wook who has hyperthymesia. Her character is nicknamed the 'sell-out' star, so style is a key point in this drama. From airport fashion to advertisements, she goes through at least 10 changes of clothes per episode.

In many ways, the character of a 20-something year-old celebrity, who is similar in nature, is the 'best weapon' in Moon Ga-young's opinion. "This drama allows me to express myself the best", she says. For Moon Ga-young, who debuted in 2006 as a child, this may be her best chance to expand her territory as a romantic comedy actress. Moon Ga-young said, "I am going to work hard to make my name a strategy".

● "A Piece of Your Mind" Chae Soo-bin... wistful crush

Chae Soo-bin takes on the role of Han Seo-woo, who is in love with Jung Hae-in's character, an AI programmer. She's a positive-minded character who is willing to support her crush's romance with someone else. According to Jung Hae-in, it's Chae Soo-bin's bright energy and her consideration of others on the set that allow her to bring out those emotions while she's acting.

Chae Soo-bin has been working hard on her romantic experience. Some examples are MBC's "I'm Not a Robot" and "Where Stars Land". This is a reason why her synergy with "One Spring Night" and "Tune in for Love" actor Jung Hae-in is looked forward to. However, there's something else that Chae Soo-bin claims is a key point and that is writer Lee Sook-yeon's writing, who also wrote "Tune in for Love".

Known as 'the teenage Jun Ji-hyun', Shin Ye-eun is attempting her first leading role ever.

Her debuting drama is the 2018 webdrama called "A-TEEN" which earned her the support of many teenagers. Despite her student-look, she aims at the 20s now by playing a working girl who gets easily hurt by love.

Her curiosity allows her to challenge herself in a unique role. "Meow, the Secret Boy" is about a cat who turns into a human and she stars alongside Kim Myung-soo in the role of the cat, Hong-jo.

"Actresses in Their 20s Take Over the Romance Genre as "Post Rom-Com Queens""
by HanCinema is licensed under a Creative Commons Attribution-Share Alike 3.0 Unported License.
Based on a work from this source