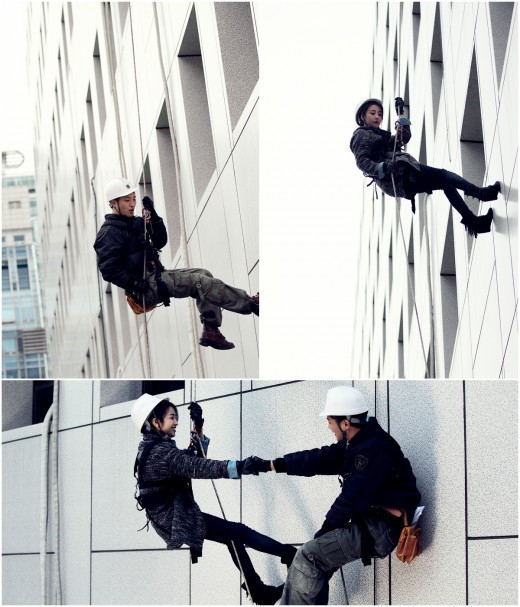 Jin Goo and Park Ha-sun hung from the wires perfectly.

Still cuts of the upcoming KBS 2 drama "Ad Genius Lee Tae-baek" were released on the 31st.

In this scene from the first episode, Lee Tae-baek (Jin Goo) and Baek Ji-yoon (Park Ha-sun) are wearing safety helmets and hanging from the sides of buildings.

Despite the cold, the two were hanging from just a single wire each for 5~6 hours. However, they didn't show their exhaustion and continued do to their work.

It was a dangerous situation but Jin Goo has a great sense of athleticism and Park Ha-sun enjoys wall climbing as a hobby.

Apparently, the atmosphere was as tense as the possible dangers around it. However, the actor and the actress didn't hesitate and did what was told. Thanks to everyone's efforts and hard work, hopefully this drama will become a success.

Meanwhile, "Ad Genius Lee Tae-baek" is being shown for the first time at 10PM on the 4th of February.

""Ad Genius Lee Tae-baek" Jin Goo and Park Ha-sun hang from the wires"
by HanCinema is licensed under a Creative Commons Attribution-Share Alike 3.0 Unported License.
Based on a work from this source