After much ado, actress Han to return to drama 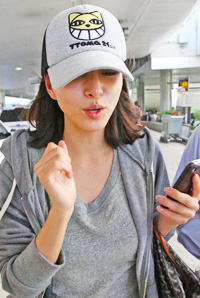 Han Ye-seul, a leading actress on the KBS drama series "Spy MyeongWol", will return to a drama shoot amid controversy over her abrupt departure, according to her agency.

Sidus HQ said Tuesday that Han will return to the set from Los Angeles as soon as possible and will do her best until the drama ends.

"She was exhausted due to the hectic schedule so that she couldn't judge things properly, damaging others. We're sorry about that", the statement said. "We talked to Han on the phone at 2 p.m. and she said she will be back as soon as she gets a return ticket _ at least by Aug. 18".

The 30-year-old actress has stirred controversy as she didn't show up for filming following a dispute with Hwang In-hyeok, the producer of the drama over her working conditions. She had asked the production company to change producer.

Due to her absence, the episode scheduled for Monday was cancelled and instead a special highlight of the drama was aired. It was the first instance of a leading actor leaving in the middle of a drama shoot. Han was confirmed to have arrived Tuesday in Los Angeles where her parents live.

Before her agency's statement, Ko Young-tak, chief of the KBS drama production, released a statement on Tuesday that it will find someone else to play Han's role. Although he doesn't expect her to return, if she comes back to the drama and continues on the next episode, it is the best way to work with her after consulting with the production company.

On the same day, the production company of "Spy MyeongWol", Kim Lee Productions said it will take legal action against Han for the damage she caused.

"We've accepted her requests to change the script adding more scenes for her and altered the filming schedule to suit her and patiently put up with her frequent late arrivals on set to continue the drama production", the statement said. "For the protagonist to abruptly stop working is an irresponsible act that breaks a promise made to viewers and ignores the staff and other actors who work hard despite the difficulties", it said.

Network stations often outsource the production of dramas as is the case in "Spy MyeongWol".

Han made her debut as a model after winning a super model competition in 2001. She became a household name after starring in the MBC sitcom "Nonstop 4" in 2003 and gained enormous popularity in the drama "Fantastic Couple", also on MBC, co-starring with actor Oh Ji-ho.

"After much ado, actress Han to return to drama"
by HanCinema is licensed under a Creative Commons Attribution-Share Alike 3.0 Unported License.
Based on a work from this source