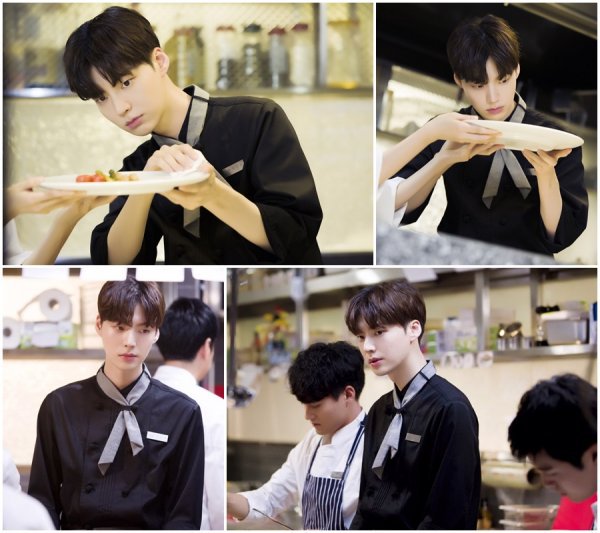 Ahn Jae-hyun is a chef in the new SBS drama "Reunited Worlds".

He takes on the role of Cha Min-joon, the main chef and owner of a famous restaurant. He is handsome and friendly. He falls for the assistant chef named Jeong Jeong-won (Lee Yeon-hee) that works for him.

Pictures of Ahn Jae-hyun were posted online. He is wearing a black chef's uniform with a grey scarf around his neck and is holding things down in the kitchen. His sharp eyes look at the condition of the dishes, wiping away any residue that might be on the plates.

This scene was taken in a restaurant in Seoul. He moved about other chefs in the kitchen to cook himself and checked on the freshness of the ingredients used in the dishes. Ahn Jae-hyun enjoys cooking in real life and goes shopping for groceries by himself.

For the role as a chef, Ahn Jae-hyun learned how to work with vegetables, how to hold a knife and all the other kitchen tools. He didn't stop there and went about to ask advice about how a kitchen should be organized to fit the needs of a chef.

"Reunited Worlds" is a romantic drama about a 19-year-old boy and a 31-year-old woman who was born in the same year as the boy. The drama is written by Lee Hee-myeong and directed by Baek Soo-chan.

"Ahn Jae-hyun, a chef in "Reunited Worlds""
by HanCinema is licensed under a Creative Commons Attribution-Share Alike 3.0 Unported License.
Based on a work from this source