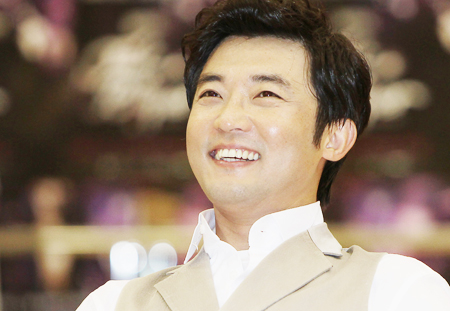 Hallyu star Ahn Jae-wook returns to the local musical scene as Daniel from "Jack the Ripper", and says he's happy to get back in touch with his roots on the stage - a place that "never lies".

"The stage is where I started and studied acting. I can have a broader image onstage, different from the bright but wounded characters I played in television dramas", Ahn said during an interview on Thursday.

The 40-year-old returns to the stage to play Daniel in the musical that opened in Seoul on Tuesday.

Set in the late 19th century London, the story is about Daniel, a passionate doctor who is driven to catastrophe after a suspicious deal with serial killer Jack.

It's the third time for Ahn to play the lead role since the musical premiered in Korea in 2009.

"I feel more of a burden than confidence, though I had played this role before. There always are new audiences who come and see me perform for the first time and I don't want to hear that I am not better than what they heard me to be", Ahn said.

Four performers - actor Um Ki-joon, singer Lee Ji-hoon, Sung-min from Super Junior and Ahn - bring their respective characteristics to the role of Daniel this time, as they alternate.

"We play the same role, but we are all different. I interpret Daniel as a man of passion. Organ transplant is a difficult surgery now, but Daniel tried it more than 100 years ago. He must have had pure passion as a doctor", Ahn said. 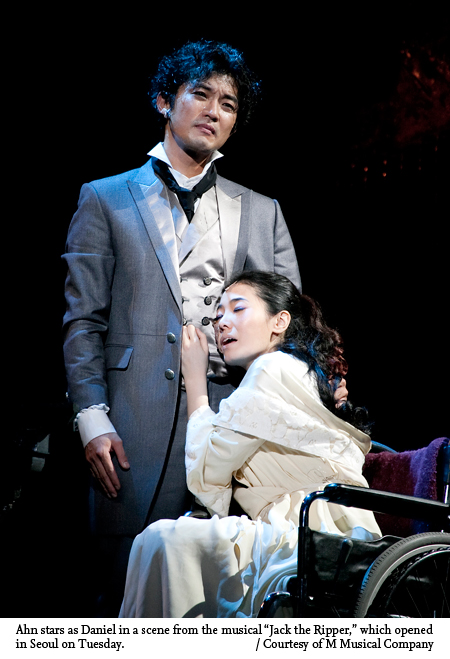 "I am more into realistic acting and 'Jack the Ripper' is based on an actual murder case. However, it is not a thriller or a crime investigation drama, but the love of Daniel and Gloria is at the heart of the story".

"While I am on stage for two and a half hours portraying Daniel, I don't lie. I hope the sincerity would be delivered to the audience and they could feel it", he said.

Ahn rose to stardom with the 1997 TV drama "Star in my Heart" and the drama's export to Japan and China brought him many overseas fans. He released albums and held numerous concerts in Japan and China, igniting "hallyu", or the Korean wave.

He was proud of hallyu.

"I always told my fans that I am not the top singer in Korea and that the really good ones will come some day. The time has come and I'm so proud that Korean singers and actors are becoming popular not only in Asia but in Europe now", Ahn said.

Now these overseas fans come to see Ahn take to the stage and "Jack the Ripper" offers Japanese subtitles to help them understand the performance.

"My fans are different from the current hallyu fans who like K-pop idols. I've performed in musicals such as 'Guys and Dolls' and 'Baby Baby' in the late 1990s but haven't been on stage for a while", he said.

"For my fans from overseas, it is novel to see me on stage, acting. I held a lot of concerts, but acting in full costume is different". Ahn also plans to shoot a television drama later this year for the first time in a few years. His last drama was in 2008, entitled "I Love You".

The actor did not want to put too much light on his return to the small screen for the first time in three years. "I don't want people to think that I came back suddenly. I was always here, doing musicals and more", he said.

He showed deep affection for the stage, a home to his acting.

"The stage is an honest place. I can feel the response of the audience through the sound of the applause", he said.

"I want to receive a warm applause from the audience, not only my fans but other people who love musicals".