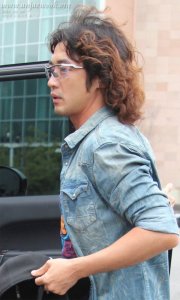 Actor/singer Ahn Jae-wook made a peculiar request to his agency in regards to his Japan tour. He wanted to consider the cities other than those that most Hallyu Stars visit which was based on his will to perform in front of a greater variety of Japanese fans rather than call for a simple successful performance based on popularity.

The four cities then selected were Yokohama, Sapporo, Gokura, and Nagoya spanning from the far northern to southern regions of Japan.

"Ahn Jae-wook JAPAN TOUR 2007 -1st Traveling-" started off with a performance in Yokohama on the 6th with approximately 5,000 guests for two and a half hours.

Ahn Jae-wook will continue on for ten days, performing in Sapporo on the 24th, Gokura on the 26th, and Nagoya on the 28th.

He opened singing various hit songs from dramas he starred in from an album that was only released in Japan, "My Life is..".

After taking out a piece of paper and reading the Japanese, the fans enjoyed his not so perfect Japanese and applauded for him. Fans from the 30s to 50s from Korea, China, Hong Kong, Taiwan, and other countries throughout Asia welcomed Ahn Jae-wook.

Ahn Jae-wook said, "During the performance last time in Tokyo and Osaka, I said I would go anywhere if people called for me and the first answering to such calls is Yokohama".

The show ended with his hit song "Friend" and came out again for an encore performance of 'Always by your side' and 'Forever'.