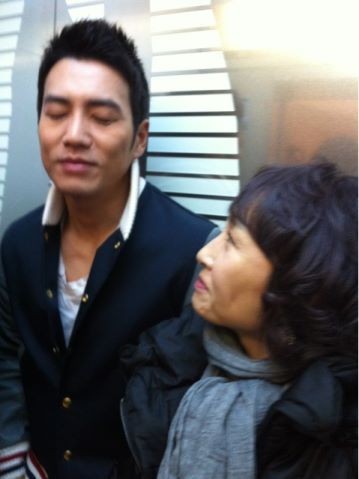 Ahn Sun-young's mother was seen gazing at Joo Sang-wook with love in her eyes.

Ahn posted a picture of her mom on her Twitter on the 13th saying, "Actor Joo Sang-wook just closes his eyes while facing Son Bang-na's love".

In the picture, Ahn's mother is looking at Joo Sang-wook with lovely eyes but on the other hand Joo Sang-wook has his eyes closed.

Ahn's mother starred in the KBS 2TV program "Happy Sunday" as part of the choir and started called Joo her son-in-law, struggling to hook him and her daughter up together.

Netizen's who've seen the picture say, "The picture is so funny", "They are so cute together", "Son-in-law's love come from their mothers-in-law", "Open your eyes" and more.

"Ahn Sun-young's mom looks at Joo Sang-wook with love in her eyes"
by HanCinema is licensed under a Creative Commons Attribution-Share Alike 3.0 Unported License.
Based on a work from this source