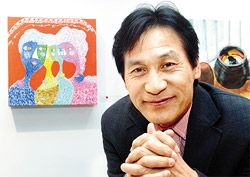 Ahn Sung-ki was voted Korea's favorite actor in a survey conducted to mark the 35th anniversary of the founding of Gallup Korea.

Some 9.2 percent of Koreans surveyed named the 57-year-old Ahn as their favorite actor. The veteran thespian also topped a 2004 survey with 13.4 percent of the votes. He was the top choice among both men and women respondents, with 10.8 and 7.5 percent respectively, showing more popularity among men than women.

Second place with 6.3 percent went to Song Kang-ho, who played the leading role in "Thirst". Song jumped from sixth place five years ago. Jang Dong-gun and Sol Kyung-gu came in third and fourth with 5.4 and 5.2 percent. Shin Sung-il earned 3.9 percent of the votes for fifth place, up two notches from five years ago. Jung Woo-sung, Hwang Jung-min, Kim Soo-ro and Jung Joon-ho followed. Kim Hye-soo came in 10th with 1.3 percent, making her the only female in the top 10. There were no actresses in the top 10 in 2004.