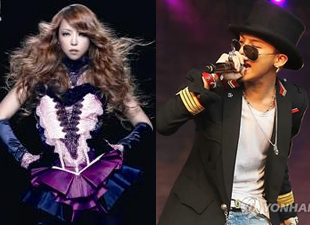 This isn't the first time Namie faces such charges. She had a similar case pop up over her song "Black Diamond", when it was linked with being familiar to Janet Jackson's "Feedback".

Critical netizens have been taking to the net: "Another one copied?", "The melodies are almost identical", "We're both Japanese, but I can't deny and protect her", "Why copy k-pop out of all things?". On the other end, some are supporting the singer: "Totally different", "A bit of a stretch to say it's plagiarized".

Namie's reps have yet to release an official statement.

"Amura Namie Accused Of Plagiarizing G-Dragon"
by HanCinema is licensed under a Creative Commons Attribution-Share Alike 3.0 Unported License.
Based on a work from this source