An American Shares His Passion for Korean Cinema with the World 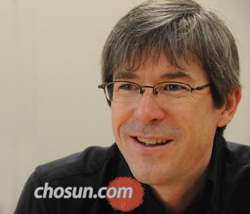 American Darcy Paquet is on a mission: he wants to inform the world about the greatness of Korean films. The 39-year-old writer and editor hosts a program called "Highlights of 20th Century Korean Cinema" by the Korean Film Archive. The bimonthly event, which started in February, screens a classic Korean film with English subtitles followed by a commentary and Q&A session with Paquet.

The KOFA came up with the idea and asked Paquet, who has been building a name for himself around the world as an expert on Korean cinema, to host it.

He first came to Korea in 1997 as an English teacher for a university and opened the film site Koreanfilm.org in 1999. Since then he has devoted himself to introducing the nation's cinematic works to a wider audience around the globe. He also wrote about the topic for Screen International, a U.K. film trade magazine, before switching to the U.S. magazine Variety, and currently serves as a program consultant for the Far East Film Festival in Udine, Italy. He is married to a Korean woman with whom he has two sons.

Paquet studied Russian at Carleton College and obtained master's degrees in TESOL and Slavic languages at Indiana University. His love for Korean cinema began after watching "Christmas in August". Among his other favorite films are Bong Joon-ho's "Memories of Murder" and "The Housemaid - 1960" by Kim Ki-young.

"There are many talented directors here", Paquet said. "So many fresh works are produced each year, perhaps due to the large number of film schools and short film makers". Nevertheless, it is difficult for Korean films to find distribution in other countries, he added.

Paquet plans to launch a magazine next month featuring pictures and profiles of Korean actors and directors.

"The Far East Film Festival in Udine will hold a major retrospective of Korean films of the 1970s next year", he said. "At that time, commercial films had to be made in a very limited time under strict government censorship. I want to show how many great films were produced under such hostile circumstances".

"An American Shares His Passion for Korean Cinema with the World"
by HanCinema is licensed under a Creative Commons Attribution-Share Alike 3.0 Unported License.
Based on a work from this source