Analysis made by the Japanese media, "Who will the next generation of the Korean-Waves stars?" 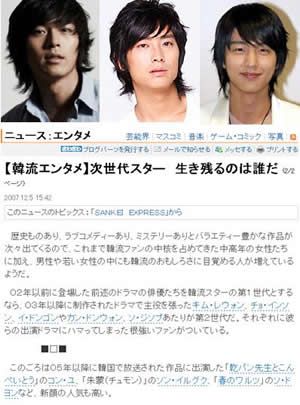 Who will be the next generation of the Korean-Waves stars?

Recently, 'Yon-sama' Bae Yong-joon's "The Legend" is expecting revive the glory of the Korean-Waves once again, which seemed to gradually cool down last few years. In addition, the expectation for the new generation of the Korean-Waves stars is increasing.

On 5th, the Sankei newspaper reported that "Hyun Bin, Ju Ji-hoon and Shin Dong-wook had been making frequent visits to Japan. It is interesting to see which of these stars will maintain their popularity as a Korean-Wave star in 10 years time".

The newspaper said, "The first Korean actor to gain such a huge popularity among the Asian countries is Ahn Jae-wook from "Star in my Heart" in 1997". It also introduced various dramas starred by Bae Yong-joon, Jang Dong-gun and Lee Byung-hun, who are the leaders of the Korean Waves at the moment.

It mentioned the extended effect of the Korean-Waves phenomenon that "As the Korean dramas started to gain such rapid popularity in Japan; the viewers were captivated by the beautiful screen works (of the Korean dramas) and the impressive performance by 'good-looking male actors'".

It defined that "The Korean-Waves is definitely a multi-dollar consumer market in Japan. Upon such process, the actors appeared prior to 2002 can be grouped as the first generation of Korean-Waves stars and the second generation are those who came out much later including Kim Rae-won, Jo In-sung and Lee Dong-gun".

"Among these stars, Hyun Bin from "My Name is Kim Sam-soon", Ju Ji-hoon from "Princess Hours" and Shin Dong-wook from "Soul Mate" are the most popular stars in Japan at the moment".

In addition, the newspaper added, "These young male stars need to think carefully how to compensate for the 2 years gap in their acting careers when they went off to serve in the army".

"Analysis made by the Japanese media, "Who will the next generation of the Korean-Waves stars?" "
by HanCinema is licensed under a Creative Commons Attribution-Share Alike 3.0 Unported License.
Based on a work from this source