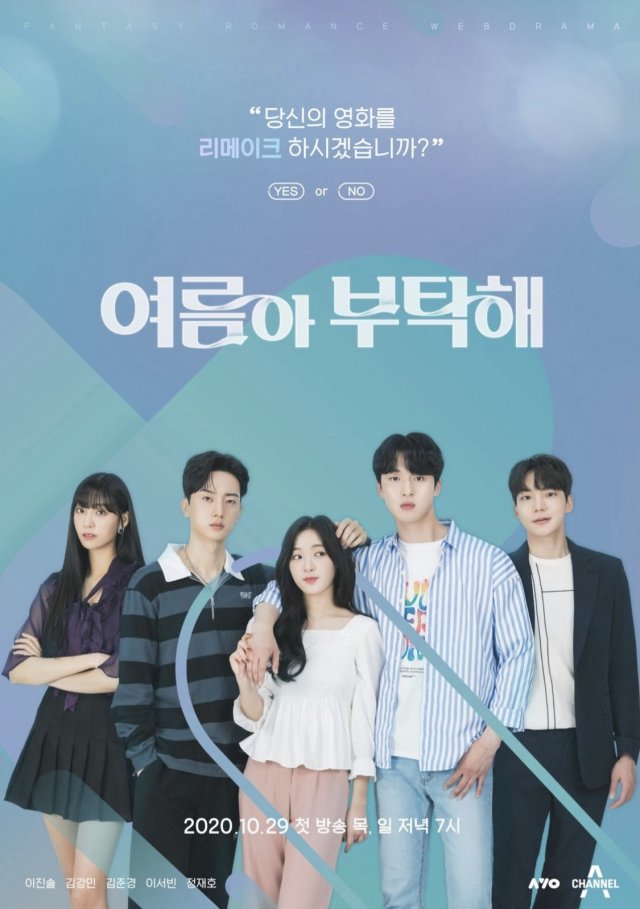 The new web drama "Summer, Please" which is set to premiere on Channel A's YouTube channel "AYO" on the 29th, will be drawn against the backdrop of KT&G's Sangsang Madang, Hongdae, Chuncheon and Busan. It is a fantasy romance drama that crosses reality and fantasy, in which the ruined film director Kim Ga-eul enters her film "A Midsummer Night's Dream" and falls in love with the character in the drama. Lee Jinsol of the girl group April has been cast as Kim Ga-eul.

The poster released shows five people including Lee Jinsol, Kim Kang-min, Kim Joon-kyung, Lee Seo-bin and Jung Jay at a glance, raising questions about their relationship. In particular, the images of Kim Kang-min and Kim Joon-kyung surrounding Lee Jinsol show strange tension, adding to expectations for the romance between reality and fantasy.

Lee Jinsol, who showed stable acting skills in the playlist web drama "I Have a Secret", will play a double role through the role of film director Kim Ga-eul and Han Yeo-reum, a character in the film she created, in the upcoming "Summer, Please".

In addition, Kim Kang-min, who made eye contact with viewers through web dramas "To Know or Not to Know", "Like" and KBS2 drama "Fix You" plays Kang Hyeok, a character of "A Midsummer Night's Dream", a film made by Ga-eul in the drama. In reality, Kang Hyeok plays an extra role in a work created by Ga-eul, but in virtual, he becomes her only helper in the imaginary world and becomes the male lead and has a heartwarming romance.

In the original "A Midsummer Night's Dream", by Kim Ga-eul, the male lead Nam Joo-won will be played by Kim Joon-kyung, and Lee Seo-bin will portray a tangled romance in the role of Cha Gyeo-wool, a third-generation chaebol with a cold and haughty charm. On top of that, Jung Jay, who made a lot of headlines by appearing on Channel A's popular program "Heart Signal 2" will play Yoon Seul-ho, a film production manager for "A Midsummer Night's Dream".

Meanwhile, the teaser for "Summer, Please" will be released on Channel A's YouTube channel "AYO" at 7PM on October 28th, and will premiere at 7PM on Thursday, October 29th.

"April's Lee Jinsol and Kim Kang-min in "Summer, Please" Poster"
by HanCinema is licensed under a Creative Commons Attribution-Share Alike 3.0 Unported License.
Based on a work from this source