"Arang and the Magistrate" Lee Joon-gi's passion for acting 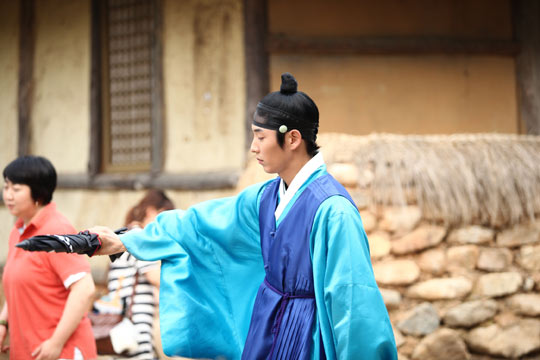 Lee Joon-gi is so engrossed in practicing his action.

Pictures of the new MBC drama "Arang and the Magistrate" were posted on the official website http://www.imbc.com/broad/tv/drama/arang4to/.

In the picture, Lee Joon-gi is practicing hard to show perfection to the viewers despite the continuous and increasing heat for the past few days.

According to a staff on site, Lee Joon-gi has not been seen dozing off or taking a break once during the whole time they've been filming.

Coming back with a drama for the first time in 2 years, Lee Joon-gi takes on the role of a magistrate named Eun-oh who can see ghosts.

Meanwhile, "Aranng and the Magistrate" is based on the motive of the Milyang Arang legend about a ghost who wants to know the truth about her death and a bad tempered magistrate who can see her.

""Arang and the Magistrate" Lee Joon-gi's passion for acting"
by HanCinema is licensed under a Creative Commons Attribution-Share Alike 3.0 Unported License.
Based on a work from this source