Are Rain and Jun Ji-hyun dating? 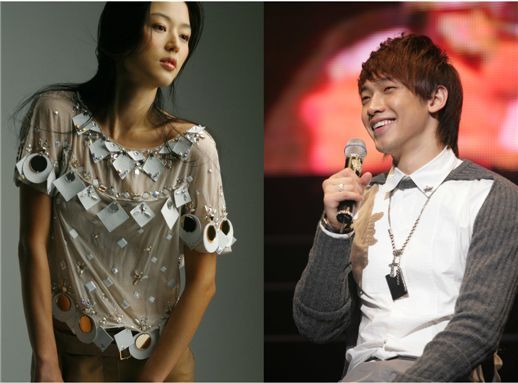 Asian pop sensation Rain and top actress Jun Ji-hyun have been dating since October last year, according to a local sports daily on Thursday.

Sportsseoul.com released a report earlier in the day, based on a three-month observation, which detailed the romantic relationship between the two including how they first met and where they date.

The paper explained that the couple had met last year through a prominent figure of conglomerate family status in Korea, who held multiple get-togethers in an attempt to matchmake the two.

Rain, 27, is known for being acquainted with some of Korea's most influential business figures including CJ Group CEO Lee Jay-hyun, Vice Chairwoman Lee Mi-kyung and Lotte Shopping President Shin Young-ja, whom he mentioned in the 'Thanks to' section of the jacket of his most recent album "BACK TO THE BASIC" he released in early April.

The article then went on to say that Rain and Jun always met at one of the two's house to keep their relationship secret from the public, with Rain in particular going over to Jun's apartment I'PARK in Samsungdong of Seoul 'as if it were his own'.

I'PARK is Hyundai Development Company's apartment complex brand and the complex in Samsungdong is said to be the priciest of them all, owned only by the top one percent of the wealthiest people in the country.

Accordingly, security is strict and one cannot enter the building without an RF card. Rain did not have one when he made his first visit last year so Jun had to make the approval, a security guard at Jun's apartment complex was quoted as saying on the condition of anonymity.

The guard added however, that the singer's vehicle was able to enter automatically from then on, indicating that Rain obtained a card from Jun.

Paparazzi photographs also showed the two actors traveling in separate cars, yet towards Jun's apartment which is three minutes away by car from Rain's house in the posh district of Cheongdam.

"The two met on a relatively regularly based completely on Rain's schedule. They would mostly meet before and after his shoots and always avoided [meeting] on Fridays and Saturdays when he has to do pre-recordings for music shows. Instead, they would always spend Sundays together when the music shows are over". Sportsseoul said.

Rain, whose real name is Jung Ji-hoon, is one of Asia's most popular entertainers whose singing and acting career have both been successful.

He has also been busy building his career in Hollywood over the past few years, making his debut through the Wachowski Brothers' pic "Speed Racer" in 2008 and following it up with a lead role in "Ninja Assassin", for which he won the award for "Biggest Badass Star" at this year's MTV Awards.

Jun, 28, became a household name after starring in the 2001 hit film "My Sassy Girl" which spawned a Hollywood remake.

Since making her international debut last year through film "Blood: The Last Vampire", she has been filming "Snow Flower and the Secret Fan" with Hollywood actor Hugh Jackman and Chinese actress Li Bingbing.

"Are Rain and Jun Ji-hyun dating?"
by HanCinema is licensed under a Creative Commons Attribution-Share Alike 3.0 Unported License.
Based on a work from this source