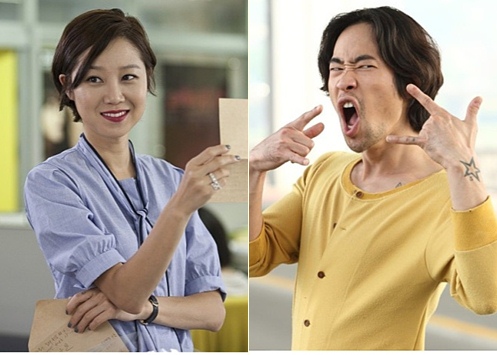 Actor Ryoo Seung-bum is coming back with a funny one in following his lover Gong Hyo-jin.

His comic act was revealed at the press preview of the new movie "Over my Dead Body" on the 19th.

Ryoo Seung-bum has the role of Jin-oh, a born fraud who dresses shabbily and sometimes acts like he's not in his right mind, earning himself the nickname, "drunken man". Ryoo Seung-bum's unexpected acts in the middle of the movie aroused laughter.

At the press conference on this day, Ryoo Seung-bum said, "I was insane during the whole making of the movie. I think the director pulled out the psycho in me.

Previously, Gong Hyo-jin left a strong impression as 'armpit hair girl' in the movie "Love Fiction" which was released last month on the 29th. Gong Hyo-jin took on the role of Hee-jin who is perfect but showed her armpit hair at an important moment and made Ha Jung-woo gasp in terror.

Gong Hyo-jin and Ryoo Seung-bum have been seeing each other since 2001. She showed up at the press release event of "Over my Dead Body" to support her lover.

She said, "I think a strong competitor has come up when my "Love Fiction" is still on".

"Love Fiction" broke through 1.6 million audiences until now and when "Over my Dead Body" is released on the 29th this month, will it be able to break the record?

""Armpit Girl" Gong Hyo-jin and "Drunken" Ryoo Seung-bum"
by HanCinema is licensed under a Creative Commons Attribution-Share Alike 3.0 Unported License.
Based on a work from this source