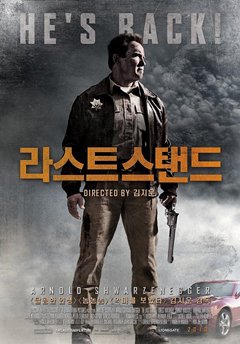 The movie revolves around a border town sheriff who does battle with a drug cartel leader. In one of the most notable scenes, the two are seen racing toward the Mexican border in a supercar and a helicopter as the sheriff tries to prevent the criminal from fleeing the country.

The poster plays on an often-quoted phrase from Hollywood movie history by including the words "He's back" -- a reference to Arnie's classic line from "The Terminator" movies -- as it marks his return as a leading man after a decade during which he has only made cameo appearances.

The movie is set to be released in Korea early next year.

"Arnie's Back with Kim Jee-woon's Hollywood Debut"
by HanCinema is licensed under a Creative Commons Attribution-Share Alike 3.0 Unported License.
Based on a work from this source