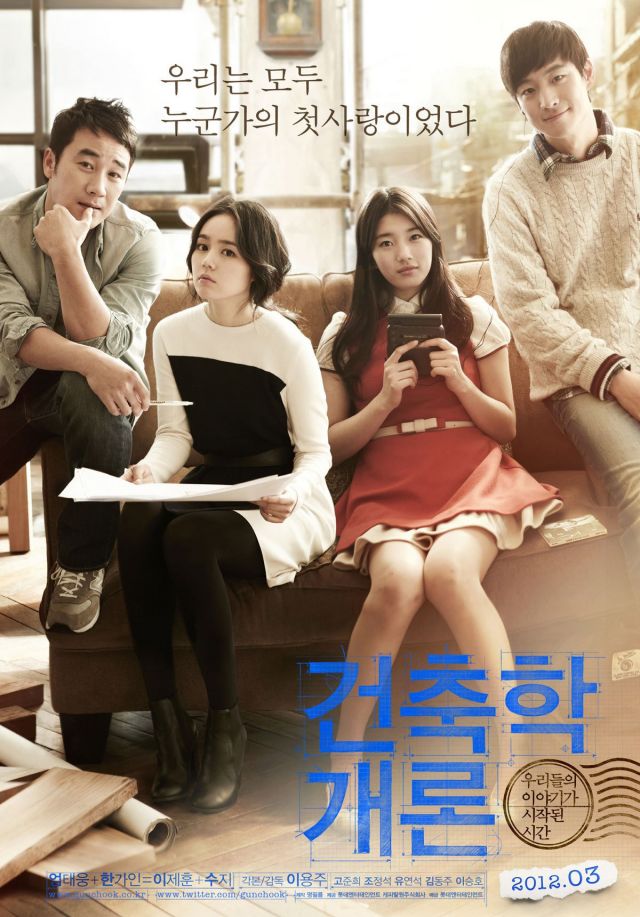 It's Thursday and I know that many of you are just waiting for the weekend to arrive so you can sleep in, get some rest, and also to check out the latest art and culture events.
So here we are with our arts and culture reporter Michelle Kim to give us the latest updates.
Hello, Michelle.

So what do you have for us today

[Reporter : ] Well you know, it's springtime and the weather is amazing, flowers are blooming, and love is in the air.
Appropriately enough, the theaters are filling up with the romantic movies these days and one of them is about first love.
Here is one that may make you reminisce about your first love.
Take a look.

We turn to the latest movie releases. The Korean movie "Architecture 101" snagged the top spot on the local box office chart over its opening weekend.
"Architecture 101" is the story of wide-eyed 20 year old university student Seung-min, who meets music-major Seo-yeon in his introductory architecture class.
It is love at first sight for Seung-min.
Seung-min is timid and has a difficult time expressing his feelings for Seo-yeon.
And after a misunderstanding, the two are estranged for the rest of their time at college.
The two meet 15 years later. Seung-min has become an architect and Seo-yeon asks him to re-build her old house.
The movie depicts the duality of love as well as architecture and the faint recollections of one's first love.


[Interview : Lee Je-hoon, Actor] "To like someone, it is a significant memory in one's life but it can also become a foundation for loving someone once again".

The movie was released amid great anticipation over its star-studded cast with Lee Je-hoon and Kpop idol Bae Suzy in the roles of the young protagonists, and Uhm Tae-woong and Han Ga-in playing their more seasoned counterparts.

Another movie wetting the lips of movie fans is the "Hunger Games", a blockbuster franchise that broke box office records before it even opened.
Set in a future where the Capitol selects a boy and a girl from each of twelve districts to battle for survival on live television.
The movie is based on Suzanne Collins' 2008 novel by the same title, and 11 million copies of the book are now in print.
"Hunger Games" is set to hit theaters in Korea next month.

[Reporter : ed:scott] "Architect 101" is in theaters right now and "Hunger Games" will be in theaters April 5th.

First love. It's always nice to think about your first love, isn't it

[Reporter : ] I think so too.
Mine didn't really quite end on a positive note, but the memories are still very heartwarming and I think it's just fun to think back on the memories from high school and college.

Yes, I definitely agree.
I also like how the theaters are showing a variety of movies these days.
And to widen the genre of the art and culture events, you have more updates for us[Reporter : ] Yes I do. I had told you guys about the brunch concerts a while ago, and for those of you who were interest

ed in that, I have similar events that may suit your taste. 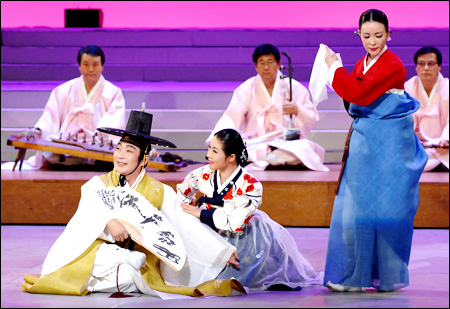 It's normally hard to see traditional performances in our daily lives.
Nowadays, there have been small Gugak performances held during lunch hours that are getting positive reviews from the public.
People are slowly gathering at the Samcheonggak Ilhwadang on a warm, sunny afternoon. They are here to see a Gugak concert that starts at noon.

The title of the song "Suryeongeum" portrays the sound of a dragon crying underwater.
A reed instrument called, "Saenghwang" and a short bamboo flute called "Danso" create a pure harmony that fills the small concert hall.

This lunch concert lasted for about an hour, and featured traditional Gugak, as well as creative songs and Korean traditional games.

[Interview : Kim Jeong-ran, Audience] "The concert was very exciting and it also made reminisce about how I used to ride boats as a hobby when I was young".

The Gugak lunch concert started about 2 years ago and has been held three times a week. This concert usually holds around 100 people.

[Interview : Moon Shin-won, Musical Director Gukak Ensemble 'Cheongarang'] "People usually think that Gugak concerts are long and boring and only accessible to people who know a lot about traditional music. However this concert tries to introduce amateurs and foreigners to the Gugak world".

These small performances are becoming a way to show the taste and style of Korean traditional culture.

[Reporter : ed:scott] This concert began on March 5th and will be running until June 27th, and it will re-open from September 3rd until December 31st.
The concert will only be held on Mondays, Tuesdays, and Wednesdays.

I think this would be a good lunch break for the people who work nearby as well.
It may be a way to relieve all the stress you had to endure in the morning.

[Reporter : ] Yes, and a good way to get a fresh new start in the afternoon as well.
I may need to go to learn how to spin dishes!

You should learn that and maybe perform for us one day.
I'm sure the viewers would love to see you perform.

[Reporter : ] Haha. I'll try to make my dish-spinning skills acceptable to perform for you all.

We will all be waiting.
And now you have the events bulletin for us

[Reporter : ] Yes I do.
I have a festival and two exhibitions for you all.
Take a look.

The VIAF festival opens for three days on April 13th at Yeoido. This festival celebrates the harmony between man and nature through pure art.
The International Sculpture Fest will be held on April 7th to the 13th at the Seoul Arts Center Hangaram Art Museum. The ISF was launched in 2011 to provide a window into the history of sculptures of the 20th century until modern day.
The Chocolate Around The World exhibition will be held from March 29th to June 17th at the Goyang Oulim Nuri Art Museum. This exhibition will be showing the history of chocolate during the Mayan, Aztec period and how chocolates are being produced today.

Thank you for your update Michelle. See you tomorrow