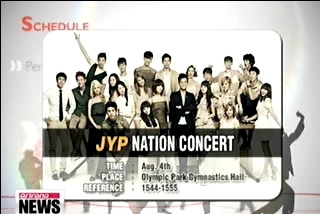 It's Wednesday and it's celebrity news time with our Michelle Kim. I hear she has all of the latest gossip on Hollywood and beyond, so let's get right to business.

So what's the news this week

Singer Younha performs on July 28th in Seoul and on the 11th of August in Busan. The concert will feature songs from her recently released 4th album "Supersonic" as well as her previous hits.

All the artists from the JYP Entertainment roster will perform under one roof for the JYP Nation concert at The Olympic Park Gymnastics Hall on August 4th. The lineup features the agency's founder Park Jin-young, along with JYP artists 2PM, 2AM, Miss A, Wonder Girls, JJ Project and more. JYP is one of the biggest artist management agencies in the nation.