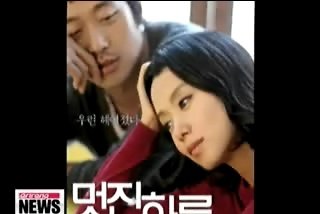 It's finally Friday and with the Olympics producing surprises every day, I'm sure the weekend will not lack excitement. But if you are watching the games and want a break, there are plenty of events happening here and in London. Our Michelle Kim is here to tell us about a few of them.

What do you have for us today

[Reporter : ] In London, the films of one Korean director per month are being highlighted through a project called The Year of the 12 Directors. The project,.. launched by the Korean Cultural Centre in London, began in January and continues through December. I will introduce you to five of these directors today and in the coming week.

Lee Yoon-ki is the featured director in August. He is known for small budget productions that feature delicate portrayals of ordinary life and loneliness. Starting next week, the Korean Cultural Centre in London will screen one of his films every week, starting with "This Charming Girl" on the 9th and continuing with "Love Talk" on the 16th, "My Dear Enemy" on the 23rd and "Come Rain Come Shine" on the 30th at the Apollo Cinema.

It hasn't been long since Lee started his career in film. It was only after studying business administration and economics in college that he decided to turn his life-long love of film into a career.  His foray into filmmaking began when his script was picked up in a screenplay contest. Later, he worked with director Lee Myung-se on the film "Nowhere To Hide". His first feature film was "This Charming Girl" in 2004, and the film earned positive reviews from critics. Lee is known for his portrayals of women and most of his films have a female character at the center. Critics now say that his depiction of women in a patriarchal society is better than that of his female contemporaries.

I've actually heard about all four of those movies, but I haven't seen all of them. Could you give us a short synopsis of each

[Reporter : ] Certainly. "This Charming Girl" tells about the life of Jeong-hae, who is a postal worker. Her seemingly mundane and monotonous life is disrupted when a writer takes an interest in her and a hidden trauma surfaces. "Love Talk" portrays Koreans living in LA and the ways they deal with wounds from the past. "My Dear Enemy" follows the life of Hee-soo, who tries to find an ex-boyfriend that owes her money she lent him long ago. Lastly, "Come Rain Come Shine" is Lee's most recent film, and it portrays a couple's last day together before their divorce.

Lee's films definitely seem to center around women and deal with people who live very ordinary livesnone of the characters seem to stand out.

[Reporter : ] Definitely. He tends to focus on getting audiences to relate to his characters and his films convey the message that we should never lose hope. I hope the audienes in London can appreciate this idea and enjoy Lee's films. The film series seems like a good opportunity to get an overview of Korean film and I hope I lot of people go to see it.

I hope so as well. And what else do you have for us

[Reporter : ] Well, artists often make works that portray their wishes and hopes. That was also the case with Chinese artists from ancient times, who embroidered their wishes in the fabric of their art using ancient symbols of good luck. Some of these works are now on display in an exhibition at the National Museum of Korea. Let's take a look at this for more.

In China, when a loved one passes away, a cicada made out of jade is buried with the body. Cicadas portray the meaning of rebirth, so the act of burying the cicada with the body conveys a wish for the person's revival. This is just one of the many auspicious symbols in Chinese art now on display at the National Museum of Korea through September 23.

This wedding robe from the Qing Dynasty features a dragon, embroidered into the red silk with gold thread. Red symbolizes good fortune in China. The 5 bats flying down from the sky on this piece of white porcelain also have meaning. The bats represent 5 different kinds of luck -- happiness, public service, long life, joy and wealth -- and can be seen in many different items used in daily life in China.

[Interview : Park Hae-hoon, Arts and Science Researcher National Museum of Korea] "The word bat in Chinese is 'pyun-bok'. The 'bok' is pronounced the same way as in the word 'bok-bok', which means good fortune".

Chinese artists also engraved phrases conveying a wish for long life on roof tiles. These engravings were passed down from the 1st generation Han Dynasty -- allowing people to hope their wishes would come true.

The exhibition displays 100 of these ancient Chinese artifacts from private and institutional collections in Korea as well as from the National Museum's archives.

I feel like a lot of cultures have artworks with symbols of blessings and hope. In addition to sharing some symbols with Chinese culture, Korean culture has a number of animal symbols as well.

[Reporter : ] We definitely do. For ancient Koreans, pigs were a symbol of wealth and crows brought bad luck.
Many Asian cultures have ancient belief systems that say having these auspicious animals nearby will make one's wishes come true.

I think that when looking at this exhibition, and the way it is presented, viewers will easily be able to understand and appreciate the meanings behind these symbols.

And now to wrap things up, you have more events for us, I believe[Reporter : ] Yes I do. Today's bulletin feautures two musicals, one called "Sachoom" that showcases a lot of dance styles, and another about the relationship between a mother diagnosed with Alzheimer's disease and the daughter who cares for her. I'll also tell you about a concert by Kim Dong-ryul that will be held in October in Seoul. Here are the details.

"Sachoom" is a musical devoted to dancing that includes a wide range of genres, such as hip-hop, modern dance, b-boying, disco and more. The show, which opened in 2004, is in an open run at The Sachoom Theater in Insadong. The mostly nonverbal musical is shown with subtitles in Korean, English, Japanese, and Chinese.

Famous for his hit songs like "Saying I Love Again" and "Drunken Confession", singer Kim Dong-ryul will be going on a tour around Korea starting in Busan in September. He will make his way to the Sungnam Art Center Opera House in Seoul in October for two days and will end his tour in Daegu in December.

The musical "Mother, The Memory Show" tells the story of a woman diagnosed with Alzheimer's and the daughter who comes back home to take care of her. The story portrays the struggles, joys and sorrows of the mother and daughter as the mother's illness progresses.