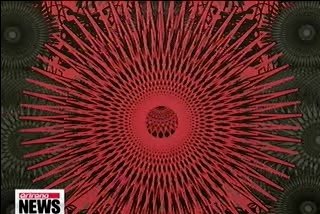 So what do you have for us today[Reporter : ] Well, there are two exhibitions going on in Seoul that are striking for how they blur the lines between genres until it is difficult to tell whether you are looking at a painting, a photograph or a computer image. The artists behind these creations use an innovative blend of techniques to produce beautiful results. Take a look.

Images of flowers, plants and leaves line the walls of the Ilwoo Art Space in central Seoul. But are they photographs[Interview : Koo Sung-soo, Artist] "When you take a three-dimensional photograph, the photo divides into two parts -- blurry and clear -- so if I press on the plants, the focus will match on all sides, and then I can adjust the form any way I want".

This fragile collection of works that tread the line between the real and the artificial is part of Koo's latest exhibition at Ilwoo central Seoul, called "Photogenic Drawings", which includes the wild flower images seen here and a new series that uses jeans.

Artist Lee Sang-nam doesn't paint on canvas -- his artworks are composed on lacquered wooden boards, which are made smooth with sandpaper.
In his third exhibition at P-K-M Trinity Gallery, the Korean-born, New York-based Lee shows abstract artworks that look something like a computer graphic on a screen rather than the paintings that they are.
His show, titled "Light Plus Right", continues at P-K-M in central Seoul through October 12th.

You've told us about exhibitions featuring painting, sculpture and photography, but to have all three genres in a single artwork seems unique.

[Reporter : ] It really is something for an artist to think of mixing these three genres together and make it pretty. Koo Sung-soo has been making these kinds of artworks for a long time, and as you've seen through the video, the result is quite a success.
The other exhibition by Lee Sang-nam is also pretty interesting -- his works actually are paintings but they don't look like it.

We'll definitely have to go check those out. And now moving on, you have this week's film previews for us[Reporter : ] Yes, I have four film previews for you today. From an unlikely vampire, to a crafty cassanova to a musical pair in chains and a time-traveling detective, the lead characters of these films have been heating up screens since the films opened late last week. Let's take a look.

"Abraham Lincoln: Vampire Hunter" takes the story of America's most respected president and turns it upside down by making Honest Abe into a vampire hunter out for revenge against the vampire who killed his mother.
Many years later, he discovers that the vampires are still around and they're on a mission to take over the United States.
So during the day, he leads the country, but at night, he uses his skills as a vampire hunter in order to save it.

The film's twist on the American Civil War pits humans against vampires instead of North versus South to devastating ends.
The film "Bel Ami" tells the story of a man who shakes up 19th-century Paris with his strikingly good looks and charm.
Robert Pattinson, famous for his vampire role in the "Twilight" series, plays George Duroy, who is willing to do anything to fulfill his desire for power.
Based on the novel of the same name, the film points out the vanity and hypocrisy of upper class women in Paris, who are all manipulated by a man with nothing.

"You Instead" is a British film that portrays the passion, romance and excitement that people can experience at rock festivals.
Set against the backdrop of Scotland's famous music festival T in The Park, the film follows a man and a woman who are literally chained together through music.
Korean films have been burning up the box office and this latest release is no exception.

The action film "Young Gun in the Time" follows the detective Young-Gun, who is given a case that is a lot more serious than his usually light load.
When a beautiful client named Song-hyun asks Young-Gun to do something that goes against his morals, he hesitates, only to see her die suddenly.
His search for answers about who she is and why she died leads him to chase down a time machine that is his only hope for solivng the case.

Wow, that seems like an eclectic mix of films. Do you have any recommendations[Reporter : ] I have to be honest and tell you that I'm not really interested in seeing Abraham Lincoln as a vampire hunter. But viewers who do find the idea intriguing may also be interested to know that the director is Russian filmmaker Timur Bekmambetov, who was also at the helm of the very well-made action blockbuster "Wanted" starring Angelina Jolie.
For me, the film to see is "You Instead", a nice rom-com and a good date movie or a light-hearted piece of entertainment to see on an outing with friends.

That's good to know, and I'm with you on Abraham Lincoln as a vampire hunter, so I think I'll be seeing "You Instead" as well. And now to wrap things up, you have the events bulletin for us, right[Reporter : ] Yes I do. Fans of K-pop sensation IU will have two chances to see her this month: first at the two-day Paju Folk Festival that starts Saturday and then at her solo concert on the 22nd and 23rd. And don't forget that the dance-centered musical "Sachoom" is still palying in an open run in Insa-dong. Here are the details.

IU is also making an appearance in an encore concert of her own. Due to the huge success of her previous 11 shows all around Korea, she will be holding two more concerts on September 22nd and 23rd at the Yongsan War Memorial of Korea.

"Sachoom" is a musical devoted to dancing that includes a wide range of genres, including hip-hop, modern dance, b-boying, disco and more. The show, which opened in 2004, is in an open run at The Sachoom Theater in Insa-dong.