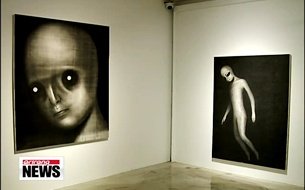 It's finally Friday and our Michelle Kim is here for our final arts and culture segment of the week. And today, she has an exhibition preview and a movie update for us.

So what will you start us off with[Reporter : ] Today, I'll tell you about the new exhibition by artist Kim Jung-wook. I had an opportunity to sit down with her earlier this week and talk with her about her work. Take a look at this to see images from both the exhibition and the interview.

Somber figures with huge round eyes, plump cheeks and small features line the walls of Gallery Skape, where the works of artist Kim Jung-wook are currently on display.
The figures are sometimes alone, sometimes in groups of twos or threes, but almost all of them gaze out at the viewer, seemingly expressionless.
The effect is haunting, even eerie.
Painted in shades of gray, the works were created with ink on hanji, which is a traditional Korean paper made from mulberry bark.
Kim explains why she decided to use these two very simple materials to create her art.

[Interview : Kim Jung-wook, Artist] "I majored in Oriental painting so the materials were very familiar to me. I also thought that ink and hanji were very good items to use to express the spiritual and the essential because they can be used in such a variety of ways".

The exhibition is called "Things that Shine", which may be an odd title for such dusky works, but Kim is known for expressing beauty, comfort, sadness and joy through works that may seem dark at first glance.
She explained that the works in this collection are no different.

The figures in the paintings seem wounded and in need of comfort, yet upon closer examination they also exhibit a depth of emotion that's unexpected.
In fact, Kim is known for paintings that portray the crucial moment when a person expresses emotion.
The longer you look at the figures in these paintings, the more human they become, morphing into any number of people.
That's because Kim didn't put restrictions on her creations.
Instead, she wants viewers to create an identity for the being on the canvas themselves.

[Interview : Kim Jung-wook, Artist] "These figures don't have a specific gender or identity. It's a woman, a man, an old person and a child. I'd like the figures to identified more as human beings, and I'd maybe even go further to say that they portray nature and other things as well".

In some ways, the figures in the paintings are a reflection of the viewer, something the artist hopes will be of some comfort to those who see them.
Kim Jung-wook's exhibition will be showing at Gallery Skape in the Gahoe neighborhood of central Seoul until January 11th.

I understand the artist's intent, but I imagine there are still some who will see the darker undertones in the paintings. What did you think of it[Reporter : ] You know, there are some people who may see it that way, but I personally think the paintings are beautiful and not eerie at all.
And even more importantly, I think the fact that people could see the works so differently shows that the artist is getting her message across.

I suppose so. I think it's probably one of those exhibitions that you need to experience in person, so I'll have to check it out. How long will it be up[Reporter : ] It opened on Wednesday and will continue until January 11th at Gallery SKAPE in Hannam-dong. The hours are from 10 a.m. to 7 p.m. from Tuesday and Friday and from 10 to 6 on weekends. The gallery is closed on Mondays, so please take note of that.

Great. And now what else do you have for us[Reporter : ] With only less than 20 days until Korea's presidential election, the whole country is thinking about one issue -- who will be the next to lead the nation.
With that in mind, there are two films that opened recently that focus on tragedies in the country's past as a way to get people thinking about the future before they go to the polls. Let's take a look.

The film "National Security" is based on the memoir of late democracy activist Kim Geun-tae.
Kim was kidnapped and then tortured for 22 days in 1985 during the Chun Doo-hwan regime.
The majority of the film takes place in a single room in a secret government institution in Namyeong-dong, where many people were tortured during the authoritarian era.
Director Chung Ji-young told the press that he made the film to encourage viewers to think about the country's future by reflecting on its past.

[Interview : Chung Ji-young, Director] "I wanted to capture part of the nation's sad history. I wonder what the presidential candidates and Korean citizens will think about the future of Korea after watching this film".

The film "26 Years" revolves around another painful event from the authoritarian era -- the Gwangju Democratization Movement of 1980, in which soldiers were ordered to fire on civilians protesting against the government, leaving thousands dead and wounded.
Based on the cartoon by Kang Full, the film is a fictional version of the events of the massacre and former president Chun Doo-hwan is cast as the person who gave the order.
The film follows five people who come together 26 years later to assassinate him.
Actress Han Hye-jin, who plays a professional shooter from the national team, talked about the significance of the film.

[Interview : Han Hye-jin, Actress] "The film, "26 Years" aims to show that many people are still hurt by the May 18th Democratization Movement. We should never forget the sacrifice that was made and console the people who were affected by it".