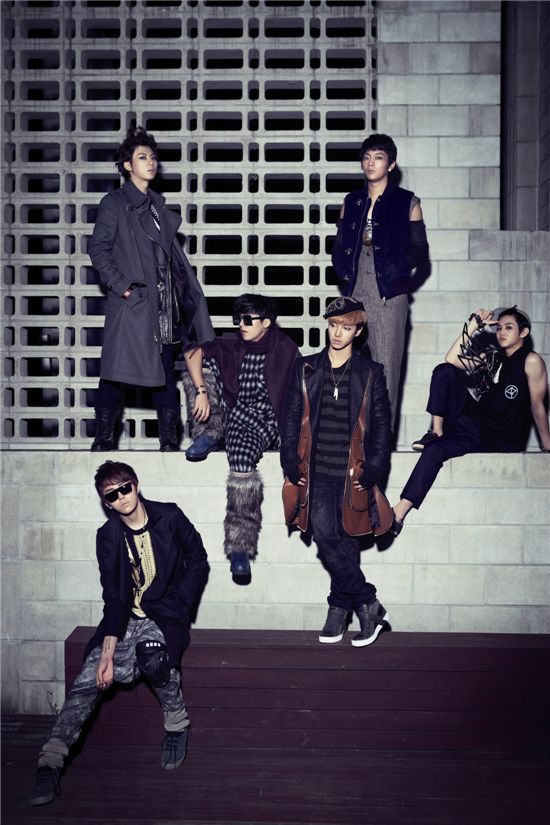 They may have been newcomers to the music scene but the year 2010 has been a busy one for Yoon Doo-joon, Hyun-seung, Jun-hyung, Yo-seop, Dong-woon and Lee Gi-kwang, the six members of boy band BEAST.

In just six months of their debut with mini-album "Beast Is The B2ST" in October 2009, BEAST, standing for "Boys of the East Standing Tall", won first place on cable music channel Mnet's music show which marked the start to a possibly highly successful singing career in Korea.

Then in the summer, they took off on a promotional tour to countries overseas including Taiwan, Malaysia, Singapore, the Philippines, Hong Kong and Thailand, attracting several thousands of fans at each stop, followed by an official debut in Japan last month through a mega-sized showcase attended by over 10,000 fans.

In the meantime, the boys' career back home took flight as well as marked by their top prize win on the major public network KBS' music program "Music Bank" with song "Soom" in October in just a week of the album's release and most recently on SBS' "Inkigayo", a music show on another major network, with "Beautiful" from their latest release "Lights Go On Again".

While the new year is less than a month away, 2010 has not quite ended for BEAST. They are set to hold their first concert titled "WELCOME TO THE BEAST AIRLINE" at the Olympic Stadium in Seoul on December 12 and will perform at year-end award ceremonies.

The year 2011 will probably only become busier for these boys who said through their Q&A with 10Asia that they hope to become famous enough to hold a world tour.

▶ Remarks regarding the past year ◀
Hyun-seung As busy as we've been, it's been a happy year for me because I think we've received a certain amount of acknowledgement as BEAST. And it's all thanks to our fans' love. I'm also very happy that I got to gain experience on both small and big stages. There's only more I find myself wanting to achieve with more stage experience. The past year has been busy but thanks to that, I'm dreaming bigger dreams every day.
Lee Gi-kwang I was happy and am grateful that we were able to receive even more love from fans as BEAST. But I believe that the upcoming year will also be an extremely important and meaningful year.
Yo-seop There's a lot to be left desired for regarding the past year but a lot of unforgettable things happened. We took first place on televised music shows for the first time, we met with our fans overseas for the first time which we'll never forget and we'll be holding our first concert. We've just started to do the many things we are capable of showing you so we should try harder to receive even more love.

▶ Plans for Christmas & New Year's Eve ◀
Yoon Doo-joon If time allows it, I'd like to spend Christmas peacefully with my family and eat my mom's cooking. But I wouldn't be able to help thinking of how our B2UTY's would want to spend that special day with us so it would be nice if we could sing a sweet Christmas carol for them. (smile)
Hyun-seung Isn't watching the "Home Alone" series at home the best way to spend Christmas? It always has been and it always will be!
Jun-hyung I want to keep things simple and just sit at a quiet and atmospheric cafe with our group's members or friends and talk about this and that.
Yo-seop I think I'll be spending it with our group. I think I'll have a meaningful time by taking part in music awards ceremonies that each broadcaster holds at the end of every year.
Lee Gi-kwang I still can't believe that I'm getting to stand more often on stages that I only dreamt of standing on while watching the television at home before my debut. You can look forward to the special performances we'll be putting on for awards ceremonies this year.
Dong-woon I think what you do with who is more important than spending Christmas in a special way just because it's Christmas. Our group's dream to hold our own concert has come true which is an early Christmas present for us and our fans. And I hope you'll enjoy our performances on year-end award ceremonies, as if they are gifts from us. I think this Christmas and year-end will be warmer than ever thanks to all the love we have received from our fans.

▶ New Year's Resolution ◀
Yoon Doo-joon I will silently do my best to make our group become acknowledged as the group that represents Korea. It may come off as being the most simple resolution yet it's also the most difficult to achieve and what I desperately want so I'm going to put in more effort with my group to make that happen. I'll work harder on my acting as well so that it won't fall short of people's expectations.
Yo-seop Rather than planning something new because it's the New Year, I will try to be more thankful and happy for today than yesterday, as well as thinking I'll become the best by working harder. I want to spend each and every day in a special way with a positive mindset, as if every day is the first day of a new year.
Lee Gi-kwang I think myself and our group should work on showing more various sides to us next year. And I want to stand out for the things I'm doing by working harder. I'm becoming increasingly drawn to both emceeing and acting as well. But most of all, I'll stay true to my profession as a singer and show that BEAST is best when performing on stage.
Hyun-seung I want to devote more time to practicing my singing because I want next year to be a year where I'll get to display my ability in singing even more. We still have so much more to show our fans and I think it's important to work hard on the basics to present the best possible performance.
Dong-woon I want to spend next year repaying my fans for the great support they show us. I think my fans become happy when they see that I'm happy, and I feel very happy when I see how happy they are. I'm hoping to get to cultivate myself mentally as well so I may become a better person. I think I can stop putting effort into my looks. (smile)
Jun-hyung I'm going to try even harder with my group to receive more love from fans and I'm going to study music composition harder to mature musically.

▶ Hopes and plans for 2011 ◀
Yo-seop When we first debuted, our goal was to receive an award for best new artist, win first place on televised music shows and hold a concert, which we have been achieving one by one. It's amazing and I'm proud of myself. That's why I'm now dreaming of us going on an Asia tour and even a world tour. We think we may be able to achieve that in the year 2011.
Lee Gi-kwang Like Yo-seop said, everyone said it was their dream to hold BEAST's own concert which we've come to achieve this month. We're now dreaming of a tour in Asia and the world and I think it could become possible in the near future as long as we work hard and keep showing our fans overseas what's attractive about us. Fans overseas, please show us your support. (smile)
Yoon Doo-joon Making BEAST's name known to more people, to people overseas, and being acknowledged for our talent is the goal we must go for till the very end. This has been the same since our debut.
Hyun-seung I want to show fans the best performances and singing that I myself can be satisfied with. To start that off, we plan to show you the best performance at our first concert on December 12 while enjoying ourselves to our hearts content.
Jun-hyung I want to improve musically and establish a definite identity as a singer.
Dong-woon It's our goal to hold a world tour through which we'll get to meet our fans around the world up closer. We want to spend time with our fans who love us closer. And I personally will work harder to gradually become acknowledged.

▶ Message to fans overseas ◀
Lee Gi-kwang Thank you for the great love you always show us, although there are more places we've haven't been able to visit you at than we have. I'll try my best to become a more successful group you can be proud of so that many people where you are will look for BEAST.
Hyun-seung We actually haven't been able to meet as often with our fans overseas nor promote ourselves in other countries so I'm surprised and moved by everything such as how you like us and buy and listen to our albums. I love you!
Yoon Doo-joon I heard that fans from various countries will come to our upcoming concert. It's amazing. All I can think of is that I need to work harder. Our B2UTYs overseas, you can look forward to our concert and I'll see you soon!
Yo-seop It's not easy for me to talk to our fans overseas but everytime, I feel that language isn't everything to communication. We thank you for the much love you've shown us and I think we'll get to meet more through our songs and performances. Miss you!
Jun-hyung I thank you for the great love and support you've shown us so far and I hope we'll get to spend more time together in the future.
Dong-woon I always thank our fans overseas for showing us so much support -- they're far away but it's as if they're always here with us. I should study foreign languages much harder if I want to talk more with them when we meet.

"[ASIAE EXCLUSIVE] K-pop idols' Wants & Hopes for 2011: BEAST"
by HanCinema is licensed under a Creative Commons Attribution-Share Alike 3.0 Unported License.
Based on a work from this source