Asian Spice Girls to serve as bridge between East and West 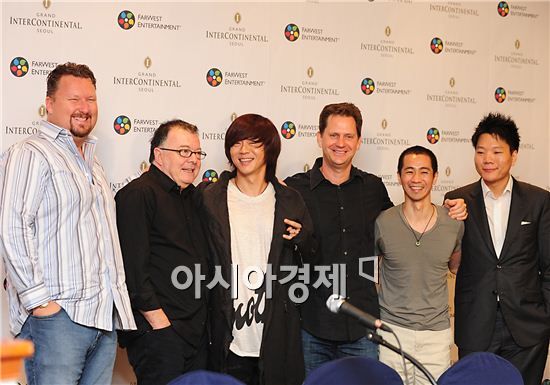 Jon Niermann, the CEO of FarWest Entertainment which founded the British pop phenomenon Spice Girls, hopes that the Asian Spice Girls will serve as a bridge between the East and West.

At a press conference held Wednesday afternoon at Seoul's Grand Intercontinental Hotel, Niermann said, "The band is being designed for the world stage and what we hope is that it will be a very good bridge for Asian talents for the rest of the world", referring to Project Lotus which is set on discovering the Asian version of the Spice Girls.

A total of 25 girls, five candidates shortlisted from five countries in Asia including Korea, China, India, the Philippines and Japan, will be competing against one another under the guidance of several prominent figures in the entertainment industry including artists who have been picked from each country to serve as mentors.

Niermann also explained that it is important to include key partners and artists who fully understand the local cultures and process of what the project is about, saying that Korea's mentor Yoon Do-hyun, the leader and main vocalist of veteran rock band YB, is "no stranger to what it's like traveling and performing around the world and bridging that gap between the East and West".

Yoon, also present at the press conference, remarked, "I believe that working with the other directors on the project, this group will successfully create a different kind of music unlike the current girl bands".

Other mentors will include pop star and model Tsubasa Masakawa from Japan, actress and singer Karen Mok from Hong Kong, renowned music composer Shamir Tandon for India and show host Miriam Quiambo from the Philippines.

Creative director and producer Eliot Kennedy, who has worked with the original Spice Girls, TV producer Brian Grant and director of choreography David Lui will also lend their experience and knowledge in shaping and training the talents.

A documentary on the entire process will be produced into a series of two parts, the first segment focusing on the search for talents from each Asian country while the latter part will show what happens to the girls at an academy in Hong Kong where they undergo training for six weeks.

"That will culminate into five girls that will form the brand new girl band and then the documentary will follow them as they make the record with Mr. Kennedy in England and their launch onto the world stage", explained Brian Grant the producer of the program.

The television special is planning for a global rollout in February and March after which Asian Spice Girls' debut single is set to be released followed by their album.

They are known as one of the most successful girl group of all time, selling millions of records worldwide and topping numerous music charts with their hit songs "Say You'll Be There", "2 Become 1" and "Spice Up Your Life".