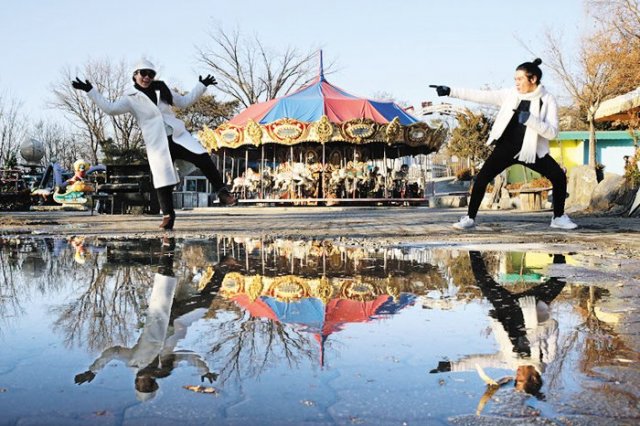 Tourists pose for a photo in Yongma Land in Seoul.

A dilapidated amusement park in Seoul that is no longer allowed to do anything except turn on the lights has turned into an unlikely tourist attraction.

Yongma Land opened in 1983 but had its license canceled in the 1990s. But in 2015 its atmosphere of nostalgic abandon drew the makers of the cover art for K-pop boy band EXO, and since then Asian fans have been flocking to the hallowed spot.

A TV soap was later shot there as well and aired in Japan last year, boosting visitor numbers. Singer IU and girl group GFriend also had their photos for their album taken here.

One 40-year-old tourist from the Philippines summed up visitors' feelings. "I'm so excited to be here because it's where EXO took photos for their album", she said. "It's dated and quite dilapidated, but I like the nostalgic atmosphere of this place, which feels like a trip to the past".

Yongma Land owner Hyun Jun-su said, "We get about 30 foreign tourists on weekdays and 50 to 60 at weekends. We charge them W5,000 but tourists keep coming to take pictures".

A Singaporean travel agency put the amusement park on the itinerary of a trip for 10 newlywed couples.

A 29-year-old tourist from Hong Kong, said, "I saw photos of Yongma Land on my friend's Facebook, so I really wanted to come. It took an hour and half from my guesthouse near Hongik University. It's been abandoned for a long time so it looks run-down, but it's a great place to take photos because it has this vintage atmosphere". 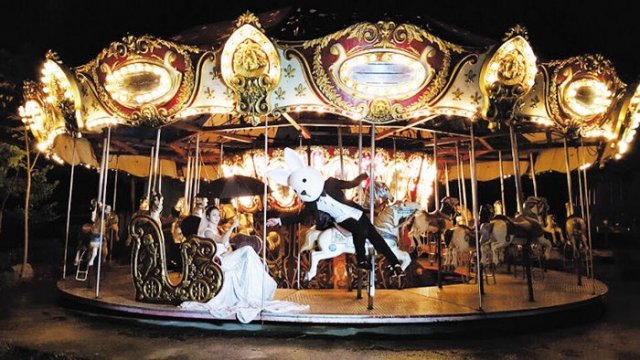 The merry-go-round is lit up in Yongma Land in Seoul. /Courtesy of Yongma Land

The number of Korean visitors increased as well. Yongma Land closes at 7 p.m. and has become a hot spot for couples who want to propose. After hours it only costs W20,000 per person to rent the whole place (US$1=W1,162).

Once 34-year-old man proposed to his girlfriend here last year and has since got married. "My wife was so moved that she burst into tears when I proposed to her in front of a merry-go-round", he recalls.

Hyun said, "After we lost the license I struggled to pay my one and only remaining employee, but now thanks to the tourists that's not a problem any more".

"Asian Tourists Flock to Abandoned Amusement Park"
by HanCinema is licensed under a Creative Commons Attribution-Share Alike 3.0 Unported License.
Based on a work from this source