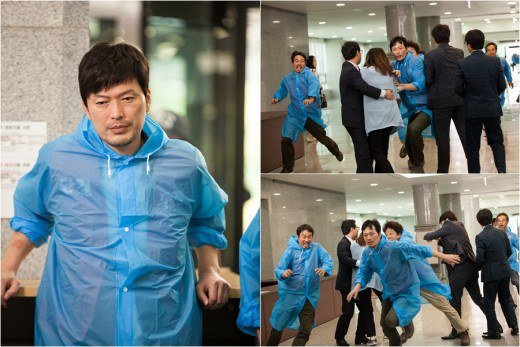 Stills of a scene from the new KBS 2TV drama "Assembly" were released.

Jung Jae-young looks determined and tense in a blue raincoat. In the following pictures, Jung Jae-young breaks through the barrier and pushes his way into the National Assembly with his colleagues. This looks like a scene from an action movie but Jung Jae-young is actually fighting for his colleagues who got fired from the shipping yard.

There are times when riots occur in front of the NA but these people broke into it. What is it that Jung Jae-young wanted to say that he would risk so much to break into government property?

This scene was taken in the Members' Office Building on the 5th and Jung Jae-young was completely engrossed in his character as he shook his lips in anger and let out his anger.

Sources from the drama said, "This scene shows Jung Jae-young's personality; he is reckless and doesn't think about the consequences".

"Assembly" is a human political drama about turning Jin Sang-pil, a Politian turned wielder into a charismatic man.

""Assembly" Jung Jae-young breaks into the National Assembly"
by HanCinema is licensed under a Creative Commons Attribution-Share Alike 3.0 Unported License.
Based on a work from this source