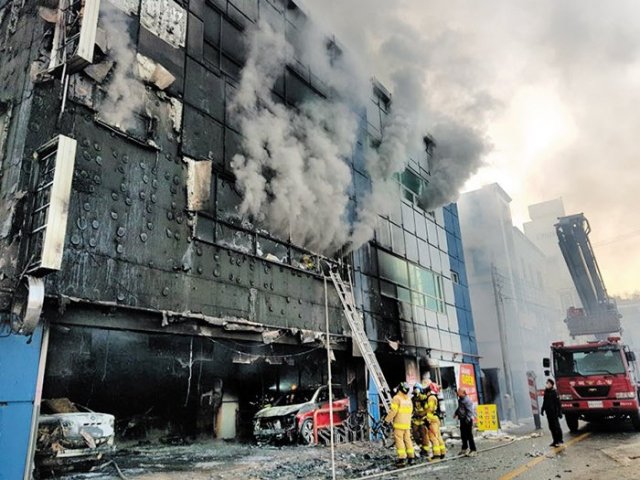 At least 29 people were killed and dozens injured when a fire broke out in a fitness center in Jecheon, North Chungcheong Province on Thursday afternoon.

More than 20 of the fatalities occurred in a public bath on the second floor that was enclosed in a wall of plate glass, which trapped the smoke inside.

Firefighters believe the blaze started at around 3:53 p.m. in a car that was parked on the ground floor. One witness said he saw flames erupt from the car after hearing a loud bang.

The flames spread quickly throughout the eight-story building and engulfed the entire structure. The interior gave off toxic smoke and fumes as it burned.

The second and third floors of the building contain saunas and baths, while the fourth to seventh floors are fitness facilities and the eighth floor houses a cafeteria. Many of the fatalities were found on the second floor.

"The building was filled with toxic smoke. The second floor was surrounded with plate glass and it looked impossible for people to escape", a witness said.

Another said, "People trapped inside were screaming for help. I couldn't bear to watch".

Scores of ladder trucks and fire engines, two helicopters and 459 firefighters were deployed but did not manage to contain the blaze until 5:40 p.m., an hour and 50 minutes after it broke out. Rescue efforts were hampered by smoke and toxic gas that continued to fill the building.

"We can't identify the exact number of people trapped in the building", a firefighter said. "The number of fatalities could rise because we are continuing our search".

Prime Minister Lee Nak-yon made an emergency visit to the government's disaster response center and directed officials to do their best to rescue people.