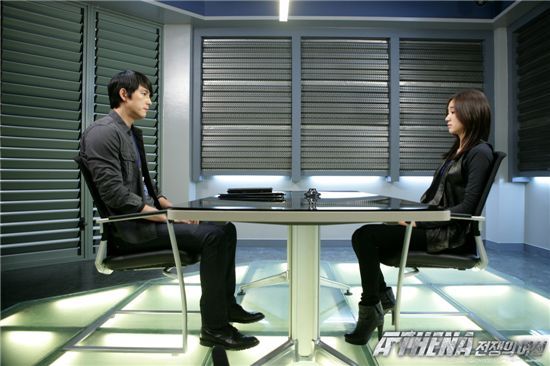 SBS' series "ATHENA" came on top of the Monday and Tuesday prime time slot, according to surveys by two media research firms on Wednesday.

Data by Total National Media Statistics (TNmS) and AGB Nielsen Media Research revealed that "ATHENA", a spin-off to KBS' blockbuster hit series "IRIS", posted average viewership ratings of 18.8 percent and 18.2 percent, respectively, both dropping by one percent compared to a week ago.

Coming in second place was MBC's TV series "Queen of Reversals", scoring an average rating of 12.8 percent on TNmS' chart and 15.1 percent on AGB's poll.

"Queen of Reversals", starring Kim Nam-joo, Jung Joon-ho and Park Si-hoo, which tells the story of the joys and struggles in the workplace, has shown signs of gaining on front-runner "ATHENA" since last week.

Meanwhile, KBS' drama "Marry Me, Mary!", starring Moon Geun-young, Jang Keun-suk and Kim Jae-wook, finished its run this week at No. 3, with average ratings of 5.9 percent on TNmS' survey while data from AGB revealed slightly higher ratings of 6.3 percent.

"Marry Me, Mary!", about a girl caught up in a double contractual marriage, ended with a happy ending with Mary (played by Moon) reuniting with Mugyul (played by Jang) after agreeing with Jung-in (played by Kim) that they would not to marry each other for the sake of their fathers.

""Athena" scores 3rd win on Monday and Tuesday nights"
by HanCinema is licensed under a Creative Commons Attribution-Share Alike 3.0 Unported License.
Based on a work from this source