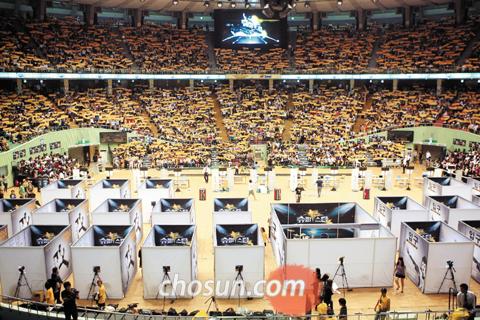 A total of 80,000 people gathered at Jamsil Stadium in Seoul on Saturday and Sunday to compete in the second regional preliminary round of the talent search program "Superstar K" on cable TV music channel Mnet.

Traffic along the boulevard in front of the stadium matched the level of peak rush hours on a week day as the auditions ran all day from 11 a.m. past 9 p.m. at 27 booths. Those who took part had already passed a preliminary round conducted over the phone with a success rate of 10:1.

A total of 710,000 people across the country took part in the first "Superstar K" audition back in 2009. This number rose to 1.34 million in 2010 and 1.93 million this year, equivalent to four percent of Korea's population. The contestants varied in age from elementary school students to senior citizens.

Seoul's Jamsil Stadium is packed with contestants participating in a preliminary round of the talent search program "Superstar K" on Sunday.

Koreans' desire to add their names to the list of current celebrities has reached such heights that 10 audition programs are now being aired on terrestrial and cable TV stations. Most are divided into seasons and the same format is repeated every year.

The deluge of audition programs has raised concerns about their side effects, as many of the students who turn up to compete do so at the expense of their studies.

"I need to be studying for my college entrance exam, but this audition is crucial in determining my future", said one 18-year-old female. "My parents still don't know I'm competing". 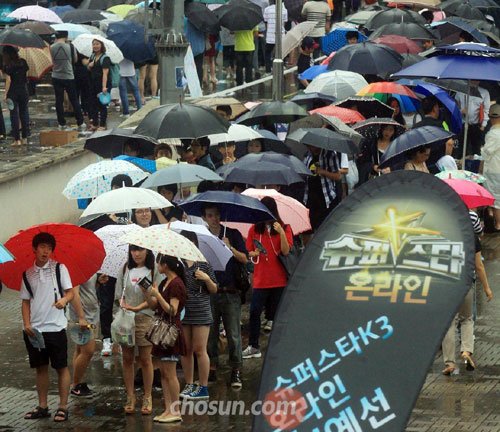 Most of the contestants said they wanted to challenge for auditions on other channels, such as "Korea's Got Talent" on tvN and "Star Audition" on MBC.

"Even if I fail, I doubt I'll regret having competed. I plan to audition for all of the singing competition programs that are planned for this year", said one 29-year-old office worker.

There are even signs that people may be jeopardizing their professional lives in order to compete, as they jump from one audition to another with little regard for their employers in their bid to find a shortcut to stardom.

Criminals are also capitalizing on the new trend of audition fever. One person claiming to be a talent scout appeared at a preliminary audition in Busan posing as a manager for famous entertainers and received money from some contestants by promising them fame and fortune.

At another audition in Daegu, a female contestant alerted broadcast staff after being accosted by a man who offered her a "special" audition. The man claimed to run a talent agency that manages a famous girl group in the country. This prompted organizers to put up posters at the audition hall warning contestants not to talk to people claiming to be talent managers.

"Broadcasters are being blinded by ratings to attract viewers and they are coming up with their own audition programs, which is hampering efforts to nurture new talents and promote mass culture", said Song Jong-gil, a mass media professor at Kyonggi University.

"Once the popularity of this fad wanes, the programs will be pulled off the air one by one and I worry about the lingering side effects".

"Audition Fever Grips Korean Society"
by HanCinema is licensed under a Creative Commons Attribution-Share Alike 3.0 Unported License.
Based on a work from this source