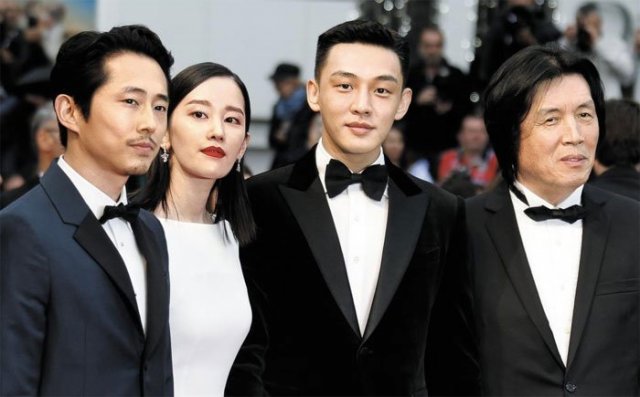 The main cast and the director of "Burning" attend a red carpet event at the annual Cannes Film Festival in France on Wednesday. From left, Steven Yeon, Jun Jong-seo, Yoo Ah-in and Lee Chang-dong /Reuters-Yonhap

As the screening ended, the audience gave a five-minute standing ovation to Lee and the main cast of Yoo Ah-in, Steven Yeun and Jun Jong-seo, who shed tears.

Local critics praised the film and generally gave it favorable reviews, upping its chance of winning the Palme d'Or, the biggest prize awarded at the fest.

Based on renowned Japanese writer Haruki Murakami's novel, the adaptation revolves around a group of desperate youngsters who are haunted by envy and resentment toward each other.

The gripping thriller features a vivid contrast between urban and rural locations. The story is told more through the mise-en-scène like setting, soundtrack, and lighting than through the script.

With a few strong contenders, "Burning" is competing with some 20 other films for the prize, which is set to be announced this weekend.

Lee won the festival's best screenplay award with his film "Poetry" in 2010.

"Award-winning Director's Latest Film Screened at Cannes Film Fest"
by HanCinema is licensed under a Creative Commons Attribution-Share Alike 3.0 Unported License.
Based on a work from this source