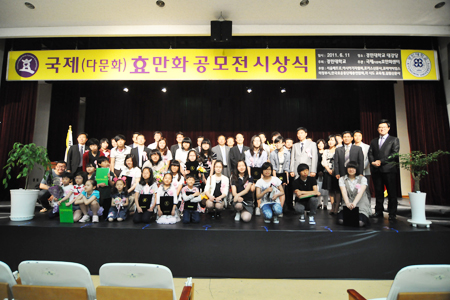 Thematic prizewinning cartoons by children from around the world are being shown this week at the Gyeongbok Palace Metro Museum, central Seoul.

Works on display include 25 pieces by young artists from Korea, Indonesia and China, the top contenders that stood out from among 8,700-odd pieces in the 3rd International HYO Cartoon Competition.

The event, organized by Kyungmin College and sponsored by Seoul Metro and The Korea Times, challenges children, from kindergarteners to high school students, to reflect on "hyo" or filial piety and other themes of family love, and, moreover, to give them creative expression.

Visitors will be able to view the grand prizewinning (1.5 million won scholarship) "The Tear of Father", a hand-drawn animation sequence by Jeong Yeon-wu, a student at Korea Animation High School.

It portrays the growing process of a young man from childhood to adulthood as a long sojourn across the folds and ridges of a father's wrinkled face.

"Ms. Jeong's piece received high scores from implications and the reversal of the excitement in the work", said Lee Sang-gi, president of the awarding committee and founding head of the Asian Journalists Association. 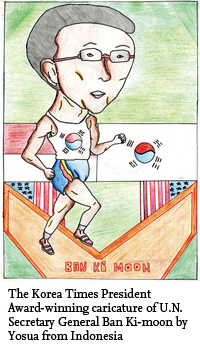 The third edition of the competition marked the first time it branched out internationally, and Lee said that the high number of submissions, from places as far away as Tanzania, made it tough. Close to 600 of the 8,700 submission came from overseas.

"We had difficulty judging so many creative works, and I must say that the panel felt a lot of regret to eliminate some of the works due to the limited number of awards. It was by a whisker".

But the organizers stress that the event is more than a contest for young talent.

"The competition is not just about comparing artists", said Hong Moon-jong, chairman of the competition's organizing committee and president of Kyungmin College.

"Through the medium of cartoons we wanted to spotlight the importance of hyo and family love in a time where social and moral values are being compromised".

He said it proved to be a personal learning experience. 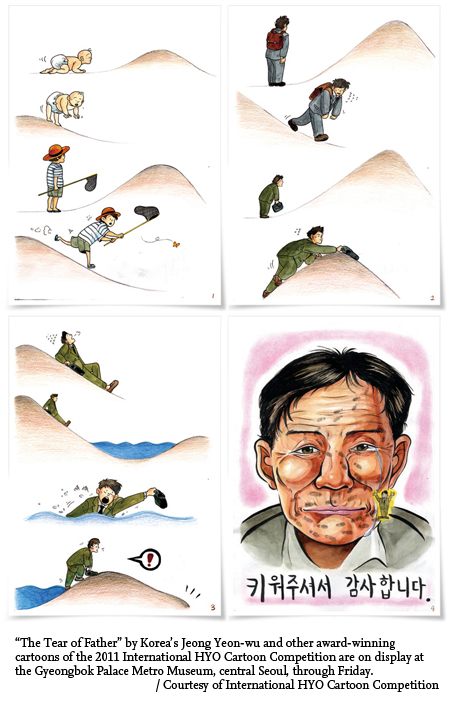 "We received numerous submissions from different corners of the globe, from China, Japan and South Asian countries like Thailand, Indonesia and Laos, as well as Spain and the United Kingdom.

"Looking at the pieces enabled me to learn how neighboring countries such as Japan and China regard filial piety in a similar way, while works by African children inspired me to think about different values", he said.

Also on display are winners of The Korea Times President Award, which include a beautiful sketch symbolizing peace by a Korean-Chinese student and a colorful caricature of U.N. Secretary General Ban Ki-moon by an Indonesian student.

"Secretary General Ban is reputed as a devoted son, and if possible, we hope to launch a special award named after the U.N. Secretary General next year", said Hong, who is a fellow Harvard alumnus of Ban's.

"Hyo is a universal value that needs to be cherished, and we hope to continue the event targeting a wider audience. In the future we plan to reach out to multicultural and immigrant families in Korea, as well as Korean expatriates overseas".

The exhibition continues through Friday at the Gyeongbok Palace Metro Museumm which is located within Gyeongbok Palace subway station on line 3. The award-winning works can also be viewed online at www.hyotoon.com.