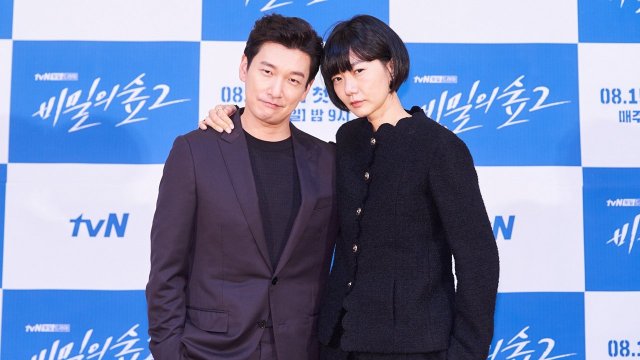 Cho Seung-woo (left) and Bae Doona pose at a virtual press event for their upcoming TV series on Tuesday. /Courtesy of tvN

"I feel very comfortable working with him this time again as I did when we first met for the thriller's first season in 2017", Bae said at a virtual press event in Seoul on Tuesday, which was livestreamed amid the coronavirus lockdown.

Cho said, "We worked very hard for the series to meet viewers' expectations and I believe they would find it interesting with more tightly plotted storylines than the previous one".

The thriller revolves around a coolheaded prosecutor played by Cho and a passionate police investigator played by Bae. They team up against political corruption.

It drew much attention when it was first aired three years ago with multifaceted characters without generalizations or stereotyping of good versus bad.___________

"Bae Doona Reunites with Cho Seung-woo in Their TV Sequel Series"
by HanCinema is licensed under a Creative Commons Attribution-Share Alike 3.0 Unported License.
Based on a work from this source