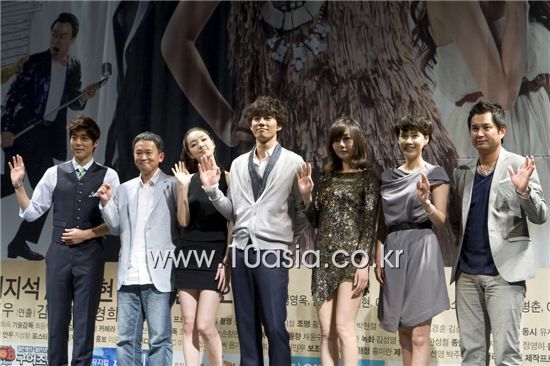 'Family' is the core of weekend dramas. The typical family drama is about an extended family with various characters that fight, reconcile and live happily ever after. However, upcoming MBC weekend drama "Gloria" is more about relationships among people who share the same lifestyle rather than family ties. Below are the excerpts from the press conference for new drama "Gloria" attended by its cast, director and scenarist.

Q: Unlike typical weekend dramas, in which an extended family usually appears, it seems that "Gloria" focuses on the dreams of characters who are in their thirties.
Director Kim Min-sik (Kim): I wanted to create a light and cheerful weekend drama. I plan to talk about the love between four young people or a story of families that share their living spaces such as in a night club or a rented house. You may think it's a bit depressing or heavy since it's a story based on poor people. But this will be about people who enjoy their lives by being thankful for whatever they have, such as their talents or abilities. 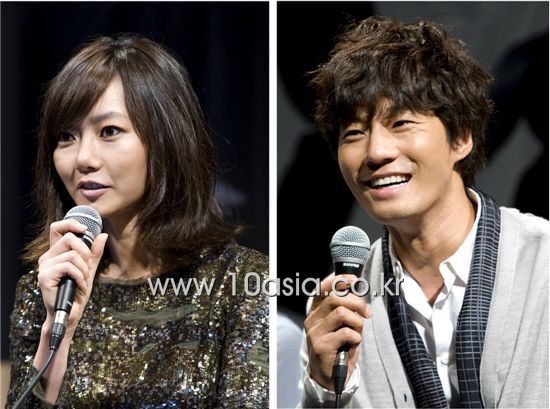 Q: Could you each introduce the characters that you play?
Bae Doona (Bae): I play the thirty-something year old Na Jin-jin who lives her life aimlessly because she doesn't have any dreams or a direction for life. She has lost both her parents so she looks after her sick older sister while delivering newspaper at the break of dawn, has a part-time at a carwash and works in the coat room of a nightclub. Jin-jin is the kind of person who works hard at whatever she can get her hands onto. She discovers her true self when she accidently takes to the stage at the nightclub.
Lee Chun-hee (Lee): Simply put, I play a loyal idiot. He tries to help out Jin-jin, his childhood friend, but instead causes more trouble. I wonder if he will be much help when Jin-jin becomes a singer.
Oh Hyun-kyung: My character is Na Jin-joo, the older sister of Jin-jin. Jin-joo used to be a brilliant singer who was in the spotlight but due to a sudden accident she becomes a physically challenged person with the mental capacity of a five year old. And she isn't just plain pure. There's a depressed state that is always contained inside it so it makes people around her feel sorry for her.
So Yi-hyun: I play the innocent and fragile Jung Yoon-seo who has no will to live. I'm very nervous because this time I will be playing the illegitimate daughter of a rich household instead of a career woman.
Seo Ji-suk: Lee Kang-suk is the illegitimate son of a conglomerate. He doesn't believe in love and is a level-headed person. The audience will be able to see many harsh sides to him.
Lee Jong-won: I am the half-brother of Kang-suk and my character Ji-suk is very possessive. He used to be in a relationship with Jin-joo and becomes involved in a love triangle with Kang-suk because he begins to like Yoon-seo.


Q: Kim Min-sik, you mostly direct dramas that focus on women, like in your previous works MBC's "My Wife is a Superwoman” and "The Woman Who Still Wants To Marry", and now "Gloria".
Kim: I like women. (laugh) I actually wanted to make a drama that women can enjoy watching and relate to because it's usually women that watch dramas. Plus I have always wanted to direct a production where the script is written by scenarist Jung Ji-woo. I found out that I had shortcomings even with my experience when I began directing. I'm very worried because I want to show the interesting imagery that came to mind when I read the script. I want female viewers' hearts to flutter and beat when watching Jin-jin.

Q: Bae Doona, this will be the second project written by scenarist Jung Ji-woo that you will take on after starring in SBS' "How to Meet a Perfect Neighbor". Is there a reason why you choose dramas written by Jung Ji-woo?
Bae: Honestly, there is no actor who could refuse a project written by Jung Ji-woo. I asked Jung Ji-woo a lot of questions like what kind of emotion is this, how should I show this feeling and bothered him in such ways when we shot "How to Meet the Perfect Neighbor". Thanks to him, I was able immerse myself completely while filming the show. I think he sent the scenario for this drama to me prepared to encounter a similar situation. (laugh) I believe we will have a fun time shooting the drama.

Q: You play a singer in the show, how well do you really sing?
Bae: I worried a lot because of that. I was worried about my bad singing because the drama can only move forward if Jin-jin is a good singer. But I took on the role because a real actor is someone who makes the effort to make the impossible become possible. The weird thing was that unlike acting whenever I began to sing, my confidence kept dropping. I am working on my singing abilities with Jin-jin's 'will do anything attitude'. 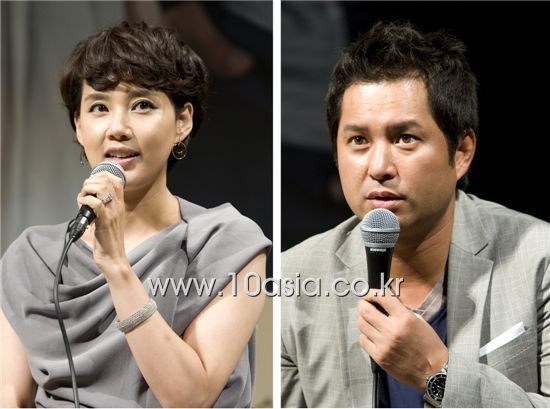 Q: Oh Hyun-kyung, you will be playing a physically challenged person after having played a perfectionist in MBC's "High Kick Through The Roof". Can we regard this as an acting transformation for you?
Oh Hyun-kyung (Oh): It's only called an acting transformation if I do a good job. The first thing that came to my mind were negative thoughts like what will happen if the outcome of the drama isn't good because I did a bad job with my character. I am taking on this role like it’s my homework and with it, I will be able to broaden my scope of acting. I get a confidence boost whenever the director says 'It's good' on set.

Q: Is there anyone you set as a role model for this drama?
Oh: I referred a lot to Sean Penn who played a challenged person in the movie "I Am Sam". And other physically challenged people from the movie, besides Sam, helped a lot too. I also observed the five- and six-year-olds around me. I practiced on the points such as reacting a bit slower and showing my emotions honestly. I still have a long way to go before I will be able to catch up to Sean Penn but I'm working hard on portraying my character as well as possible.

Q: How do you think Jin-jin feels about taking care of a physically challenged sister?
Bae: We shot a scene few days ago, where I'm trying to calm Jin-joo who is crying at a crosswalk. That was when I realized what Jin-jin was feeling. We were on the road with all these cars passing by and suddenly it came to my mind that we only have each other. I also thought 'I must live because of this woman'.

Q: Lee Jong-won, up until now you've played the characters at two extremes -- either an honest or adulterous man. What was it like to take on the role of a son of a conglomerate who has a mean personality?
Lee Jong-won (Lee): I think it's significant that I get to stay alive and not get killed off in this drama. I frequently get asked that question because I've played the adulterous role a lot. I can't say that I hate infidelity because it has led to me where I am right now. I consider the adulterous role to be a genre that I can take on. 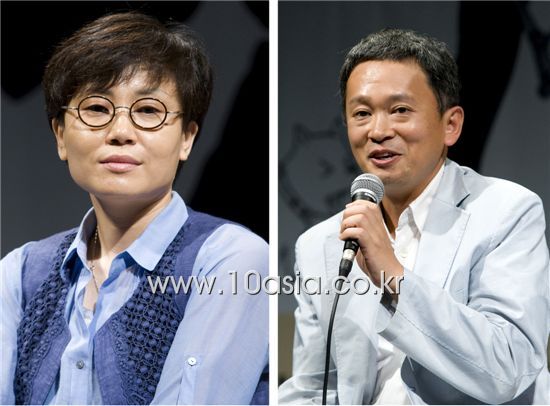 Q: Main character Na Jin-jin seems to be the typical nothing-can-bring-me-down type of character from dramas. How will this character be different from the other dramas that have featured characters like her?
Scenarist Jung Ji-woo (Jung): There has always been a strong-willed female characters in all the dramas that I write. And most of the time, people think of the nothing-can-bring-me-down character whenever they see a strong-willed woman but I think this drama too will not break away too far from it. I am however, thinking of ways I can add in a different storyline but at the same time, I want to write a corny drama. There are many trendy and fun dramas but personally I want the drama to be something that my mom can enjoy watching as well as feel comforted by. "Gloria" will show how those people who live on the fast lane and those who fall behind, find comfort in each other.

Q: Bae Doona, you've constantly been praised for your controlled acting so how has it been acting the role of Na Jin-jin? You must be pressured over having to find the balance between controlling your acting while also overdoing it.
Bae: I prefer roles where I play characters who control their emotions but not all characters are like that. I will do the kind of acting where I push down my emotions since Jin-jin is a character who doesn't cry even if she wants to but I plan on acting in a friendly way since its one of the requirements of weekend dramas which are watched by various age groups. I am going to express every emotion in detail so that the viewers will feel sad and a little bit bitter when they see Jin-jin's brave image.

"Bae Doona was "worried over bad singing""
by HanCinema is licensed under a Creative Commons Attribution-Share Alike 3.0 Unported License.
Based on a work from this source