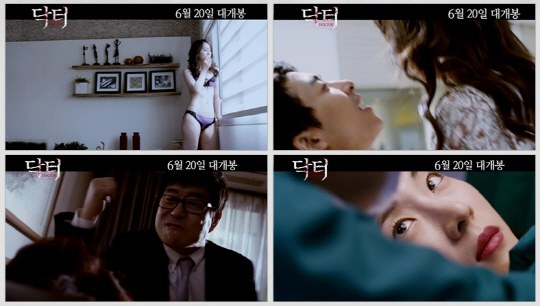 A short video preview of the movie "Doctor" revealed a woman lying on the surgical bed with a low piano sound in the background. The copy says, "Until it happened..." In-beom's (Kim Chang-wan) young wife Soon-jeong (Bae So-eun) is seen standing by the window in just her underwear with an expressionless face, smoking a cigarette.

She is then seen in a very extreme scene with her boyfriend Yeong-gwan. In-beom is infuriated by his wife cheating on him and imagines himself hammering Yeong-gwan on the surgical bed or strangles a patient thinking it was his wife. "Doctor" is a revenge story about a doctor who takes revenge on his wife for cheating on him.

"Bae So-eun in "Doctor""
by HanCinema is licensed under a Creative Commons Attribution-Share Alike 3.0 Unported License.
Based on a work from this source