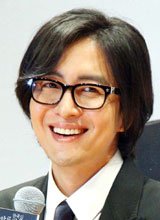 Bae Yong-joon, the bachelor actor credited more than any other with popularizing Korean soaps among middle-aged women overseas, is dating a woman 14 years his junior.

Bae's agents KeyEast on Monday said the couple met through an acquaintance three months ago.

The news broke earlier in the day, when Japan's Nikkan Sports daily reported that the actor is romantically involved with the 27-year-old daughter of a conglomerate owner who lives in Seoul.

Only a handful of Bae's close friends are said to have known of their relationship.

Bae had been been careful so to shield her from the media and was apparently caught on the back foot by the media coverage.

"Bae Yong-joon Dating Much Younger Chaebol Daughter"
by HanCinema is licensed under a Creative Commons Attribution-Share Alike 3.0 Unported License.
Based on a work from this source