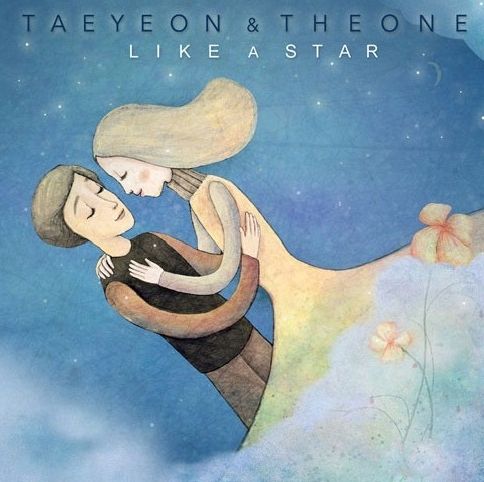 Album jacket of Taeyeon & The One' "Like A Star"

Girls' Generation member Taeyeon and solo male singer The One's duet song "Like A Star" and other two ballads dominated Gaon's weekly singles chart during the final week of November.

"Like A Star", the title track to The One's single album, climbed up five steps to reach the top of Gaon's singles chart from November 21 to 27.

"Always" from Huh Gak's first mini-album of the same title that topped the Gaon single chart for the past two weeks was pushed down two steps to land in third place.

Some of the new songs that entered the top 20 list of Gaon's chart last week were Orange Caramel's "A~ing♡", T-ara's "Why Are You Like This", Kim Jisoo's "Erasing You" and Kim Bum-soo's "Appear".

Brown Eyed Soul came next with their third full-length album "Browneyed Soul" containing several ballad songs including "If It Were Same" which was ranked at No. 4 on Gaon's singles chart and other sentimental pieces such as "Gone", "With Chocolate", and "Rainy".

The third runner on the chart was once again, the soundtrack to SBS weekend drama "Secret Garden", a romantic comedy which began its run three weeks ago. The record features songs by several well-known ballad singers in Korea including 4Men.

Other popular albums during the past week was "New Beginnings", male solo artist Tim's fifth release and "Haru (translated as "A Day"), the soundtrack to an omnibus drama of the same name produced by Korea Tourism Organization (KTO).

"Ballads take over Gaon weekly chart "
by HanCinema is licensed under a Creative Commons Attribution-Share Alike 3.0 Unported License.
Based on a work from this source