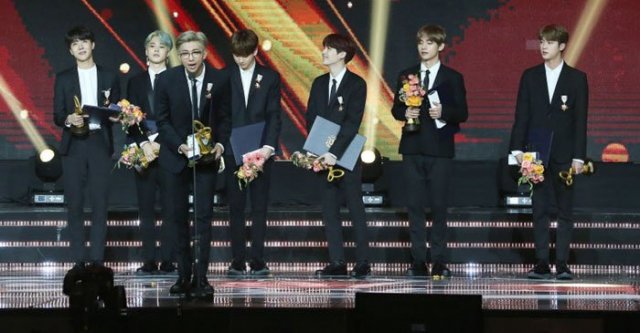 RM, the leader of Bangtan Boys, accepts a medal in recognition of the band's promotion of Korean culture at a ceremony in Seoul on Wednesday.

BTS, also known as Bangtan Boys, were given an award for their contribution to promoting Korean culture, along with several other cultural figures and celebrities including Kim Nam-joo, Son Ye-jin, Yoon Sang and Yoo Jae-suk.

Hundreds of local and foreign fans gathered to see their idols at the red-carpet event ahead of the awards ceremony in Seoul on Wednesday.

Tickets for the ceremony were supposed to be free, but scalpers were charging up to W1.5 million due to rumors that BTS would perform (US$1=W1,133).

BTS returned home in the early morning of the same day after wrapping up their nearly two-month tour of North America and Europe.

They hogged the limelight during the ceremony, with fans greeting them with cheers and screams of delight. RM, the leader of the band, drew a strong reaction from the crowd when he said, "I'd like to dedicate this honor to our fans".

"Bangtan Boys Steal the Show at Awards Ceremony"
by HanCinema is licensed under a Creative Commons Attribution-Share Alike 3.0 Unported License.
Based on a work from this source