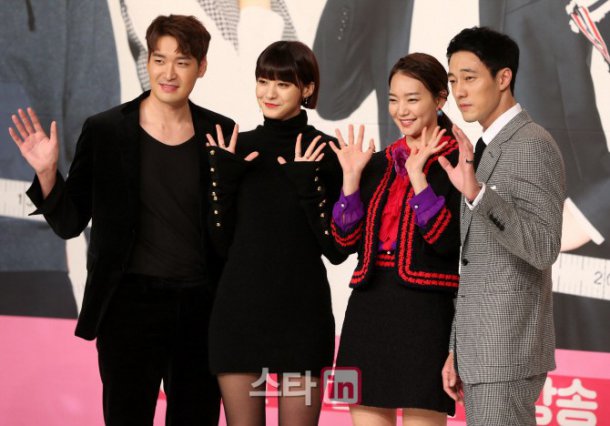 The new KBS 2TV drama "Oh My Venus" started off with a press conference. The first episode airs on November 16 at 10PM and expectations are high. The reason is thanks to So Ji-sub's batting eye, Shin Min-ah's transformation, Yoo In-young's good vibes from the previous drama and Jung Gyu-woon's strength after having been injured recently.

Actor So Ji-sub has a good eye for choosing his work. There was a time of fluctuation after "Something Happened in Bali" which took him to Hallyu stardom and "Sorry, I Love You" but he soon recovered with "Ghost - Drama" and "Master's Sun". Expectations are high for "Oh My Venus". So Ji-sub said at the drama premiere, "I wanted to look good before, but now I just want to be comfortable".

Shin Min-ah tries something new. She has had a stronger 'CF Queen' image to her than 'an actress' but she actually starred in many successful drama. She did a good job in "My Love, My Bride - 2014" and landed herself in the 'romance comedy queen' title after co-starring with Cho Jung-seok. This time, she's transforming herself into a 77 kilogram big girl. She has to withstand hours of make-up for this but she's going to make it worthy. She said, "The character attracted me and I think it'll be fun to look for her inner beauty".

This is a chance for Yoo In-young. She starred in "Mask" as Choi Mi-yeon and did well. She plans on bringing that good vibe to "Oh My Venus" as Oh Soo-jin who is born from a rich family and graduated law school at the top of her class but is always called a 'fatty'. She lines up in conflict with So Ji-sub.

Jung Gyu-woon hasn't had much luck lately. He starred in "Real Men" for a while but suffered a fracture while battling with Julien Kang. However, he's coming back with "Oh My Venus" as the youngest national swimming athlete and born sportsman. He competes with So Ji-sub for Shin Min-ah. He said, "I'm a swimmer so I should look healthy but my injury prevented that. I am working out now and I will be prepared".

""Oh My Venus" hit points"
by HanCinema is licensed under a Creative Commons Attribution-Share Alike 3.0 Unported License.
Based on a work from this source